I recently inherited my mother's T43p and decided to keep it around as a dedicated XP machine and 1st foray into older thinkpads.
In an attempt to speed up performance with a spare 128gb msata ssd I had laying around, I purchased the following msata IDE adapter: https://www.amazon.com/gp/product/B017V ... UTF8&psc=1

After installing XP and drivers, performance has been underwhelming and worse than the 7200 rpm HDD that came out!
In addition to sluggishness, there are hang-ups, freezing, and generic-system BSODs.

Anybody with experience care to chime in if I had overlooked something?
The only avenue I have not explored is a defective msata IDE adapter.

Any help appreciated. I offer advance apologies for any annoyances or missteps ahead of time; I never really used XP as an operating system. And was only introduced to computing with vista and came to maturity with Win 7.

Specifics:
- Windows XP Professional SP3 32-bit
- No hardware changes aside from HDD swap to msata SSD w/ IDE adapter specified above
- msata SSD is Dell-OEM Hynix SH920 128gb; a working pull
- No 3rd party software installed
- Only drivers installed: ATI video, Soundmax audio, Bluetooth. Had rolled back wireless, ethernet, and 56k drivers during troubleshooting to no avail. Drivers confirmed working and were sourced from original HDD's SP2 installation.
- T43p is in near immaculate condition as it was purchased originally as a spare that never received the call to duty. Worked perfectly fine with HDD that came out. As a result, hard-sata mod is not an option.
Top

T43 already comes with a SATA-to-IDE chip.
By adding an IDE-to-SATA converter/adapter, you make the drive-signals go through unnecessary hoops, which it doesn't handle very well.
Still NOT a great day for a Guinness! (the Real Black Stuff).
Ireland is on FULL lockdown until 5 March 2021!
Covid-19: Stay safe, so Mask it or Casket!
Top

Got it, I was not aware of that! Makes sense!

Do you think I would have better fortunes trying a native-IDE SSD instead?
Such as the following?

Looks like I'll grab a spare HDD since they're only $12/ ea.

Is it worth it in your opinion to explicitly get a 7200 rpm drive over a 5400 rpm drive for these machines?
What came out/ went back in after your helpful response is 7200 and the performance is not half bad.
Top

Is it worth it in your opinion to explicitly get a 7200 rpm drive over a 5400 rpm drive for these machines?
What came out/ went back in after your helpful response is 7200 and the performance is not half bad.

Not all drives are created equal.

The Samsung drive that RBS recommended - and I wholeheartedly agree - is actually faster than most 7200rpm drives. Arguably the best spinning drive for these systems.

Other 5400rpm drives are best left alone in this particular scenario IMO/IME.
...Knowledge is a deadly friend when no one sets the rules...(King Crimson)

I see, while the aforementioned spinpoint drives are coming my way from Hong Kong, I remembered I had a spare WD Blue WD800BEVE drive from a prior ibook clamshell resurrection I did. Truth be told, the ibook actually played nice with the same adapter I had attempted to use with this T43p.

Curious how this WD drive stacks up.
Top

Curious how this WD drive stacks up.

You'll probably get a "2010 error" on boot, just press Esc and don't worry about it.
...Knowledge is a deadly friend when no one sets the rules...(King Crimson)

vanillagod wrote: ↑
Thu Dec 31, 2020 3:58 am
Truth be told, the ibook actually played nice with the same adapter I had attempted to use with this T43p.

Since it has a native IDE port, there shouldn't be a problem, unless the SSD is way too fast for the laptop and causes it to stutter.

Your issue stems from having two IDE-to-SATA bridge chips between the chipset and the SSD. You're actually lucky it even worked-- in many cases the SSD doesn't get detected by the laptop at all.
Daily driver: X220 4291-C91 i7-2620M

Thanks for the help and insight All. Got my order of Samsung HM160HC drives in yesterday and got around to restoring a separate install on one of the new drives.
Happy to confirm the drive is as quick as the 7200rpm if not faster and on top of that, near silent. All that's audible now is the fan. 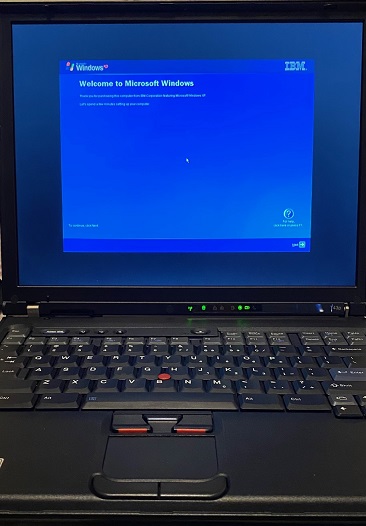 Also just wanted to share my good luck, I noticed the 9-cell battery with this machine had been surprisingly healthy this entire endeavor and held a charge that last hours. Near edging the longevity of the batteries in my daily-driver T420 & T530.
When I checked power manager, I was floored by the single-digit cycle count. It pleasantly appears my mother had replaced a battery at some point on her primary t43p but opted to swap to the battery that shipped with this spare instead (machine build date 2006).
It's a later-production Lenovo branded battery which from my hunting on ebay and amazon is apparently a rarity of sorts. Besides the typical Chinese-third party fare, even used IBM-branded ones were sparse and OEM new-old-stock non-existent. 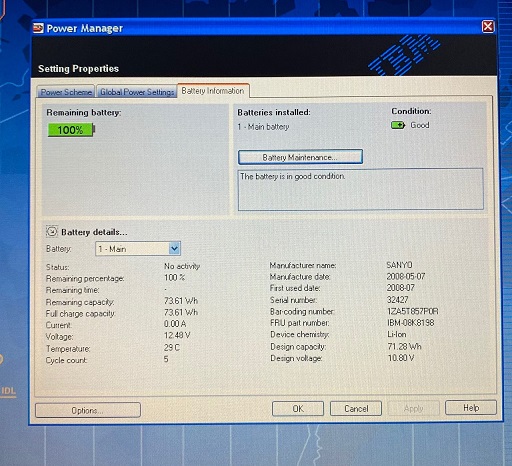 You can use the ThinkPad Fan Control to quiet down the notoriously noisy fan.

Link to all the versions here

Notebook Hardware Control is also a great utility to undervolt the CPU and make the machine run cooler and quieter: