Apologies if there's already a thread like this. I searched but did not see one. Maybe I did not look hard enough. 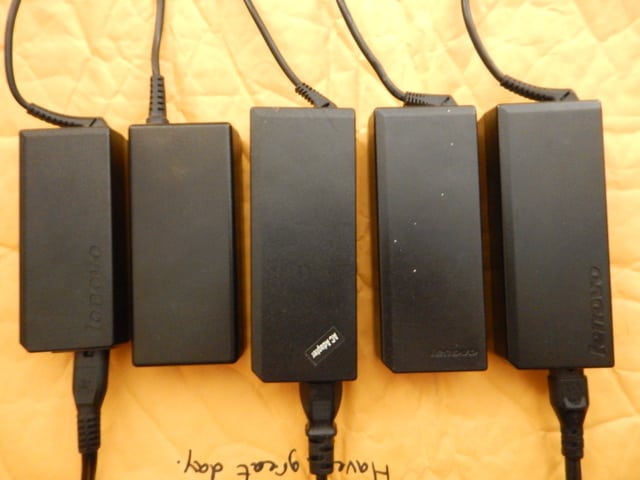 One of the most integral parts of a laptop: the power supply. It charges your battery and gives life to your computer. There are Good power supplies, the Genuine Lenovo parts that are weighty, diverse, and resilient. Then there are the Evil power supplies, Fake parts who pretend to be what they are not, luckily I don't have any. Then there are just the aftermarket ones that are blatantly aftermarket, they're not fooling anyone to their inferiority. Used Genuine 90W and 65W adapters are super cheap right now on Ebay, around $8 for a 65W and $10 for a 90W, give or take a few, make a best offer here or there. For most efficient results buy used Genuine.


Manufacturers of genuine Lenovo AC adapters include Chicony, Delta, Astec, Liteon, and Hipro, and some others. Differences between the manufacturers are minimal to none. The appearance of the AC adapters also changed over the years. The biggest difference can be found in the size, color, and position of the Lenovo badging, but it's not an identifier of who manufactured what, rather its a sign of when they were manufactured. You're better off just reading the date stamp on the bottom than thinking about the badges too much. A smaller difference is the plastic interface between the power brick and the tip-side of the cord - it can vary in size and shape even on the Genuines.

So if you bought old Thinkpads new, or collect used Thinkpads now, you can get a variety of different looking Genuine Lenovo AC adapters. According to Lenovo Parts Lookup, my 93P5026 with a 2007.03 date stamp, small badging, small cord interface, and old tip is a LiteOn. I also have a 2012 65W, and a 2010 90W with large badges and new tips. I believe the change to large badges and stronger tips occurred in 2010, with the introduction of the T400s. 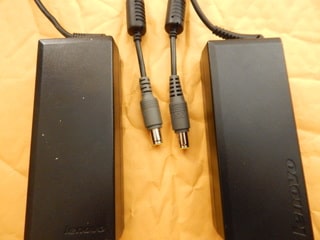 I also had a new barrel 90W with a small badge.

Most interesting is this 2006 "AC/DC" adapter with a Thinkpad logo: http://i.ebayimg.com/images/g/PEsAAOSw3 ... -l1600.jpg If they had Thinkpad logos, could they ever have had IBM logos?

I have also seen some rare IBM-badged Lenovo 90W AC adapters on Ebay and I was tempted to buy one for the sake of the IBM badge. I presume they must be, like the 2006 "AC/DC" adapter, from the Z60m era. Shame I didn't save a picture then. Lenovo Parts lookup gives me a generic picture when I put in my Z60m's SN. Or were they just well-crafted fakes? 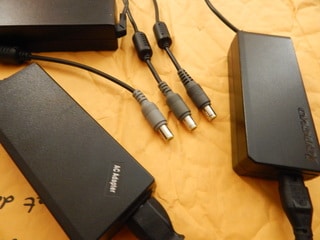 This benign Generic just says, "AC Adapter." At least it's not pretending to be Genuine. It says "Replacement" on the bottom. It has decent weight, but not as heavy as a real one. You can see the tip is shaped like the old style but is the wrong color: a sickly light gray. The cord is also shorter and the whole thing smells like death. 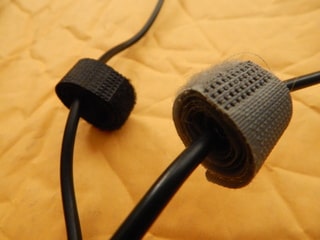 The fastener is black on Generics (left) and stone gray on Genuine adapters (right). It also tends to fall off the Generic ones. 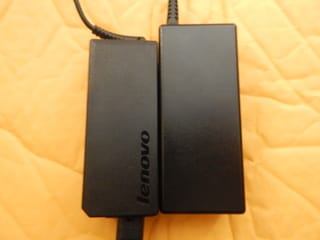 Now here's a 65W Genuine next to the cheapest Generic 65W you can buy on Ebay. This Generic doesn't look at all like the real thing. It's incredibly lightweight, because it's brainless and gutless. It gets hot, its smelly, and the cords are super short. Don't buy it. It's physically larger than the genuine 65W https://s16.postimg.cc/m4q6xkob9/DSCN4272.jpg and the tip is the wrong color. 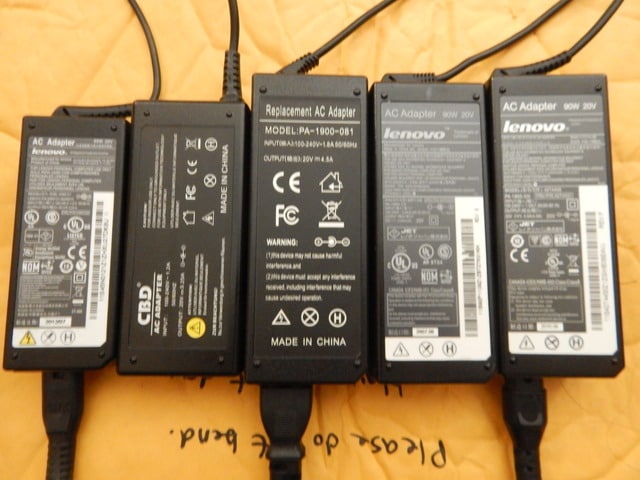 I wonder which ones are the genuine ones.

But a nice collection.
Still NOT a great day for a Guinness! (the Real Black Stuff).
Ireland is on FULL lockdown until at least 31 January 2021!
Covid-19: Stay safe, so Mask it or Casket!
Top

I have an old IBM charger that I picked up from my work when they were disposing old Thinkpad stuff. I am overseas now so I can't post an image of the charger but it has little wings or ridges on the ends so you can coil the cord around those ends. I am sure you guys with older Thinkpads would have similar chargers.
The charger looks like something Richard Sapper would have designed. That functional IBM styling which we all appreciated.
Active --- Love the X series
X301 W 7/Mint | X201 540M L Mint | X220 2520 W7/Mint

A few things I know about fakes is that sometimes they will have slightly incorrect colors (like black Velcro instead of gray, or different shade of gray on the tip). Also their serial number is sometimes only 20 characters (should be 22).

shawross wrote:I have an old IBM charger that I picked up from my work when they were disposing old Thinkpad stuff. I am overseas now so I can't post an image of the charger but it has little wings or ridges on the ends so you can coil the cord around those ends. I am sure you guys with older Thinkpads would have similar chargers.
The charger looks like something Richard Sapper would have designed. That functional IBM styling which we all appreciated.

I think i have one. Plus i have more interesting power bricks to share this photo.

Your is the 3nd in upper row. And yes it is the best design for cable winding. But i believe that this design was made long time after Richard Sapper made design for Thinkpad.

Some hints:
All bricks with black bands (except bigger one with Lenovo sign) are oldschool 16v powerbricks (before T60 era).
In lower row: two from the left are combo adapters (AC + car / plane charger) for new 20v and old 16v Thinkpads. After them 170W for W700 and the Bigger one is 230W for W701 (may be it is counterfeit but W701 think it is 230W and it is not hot when working). 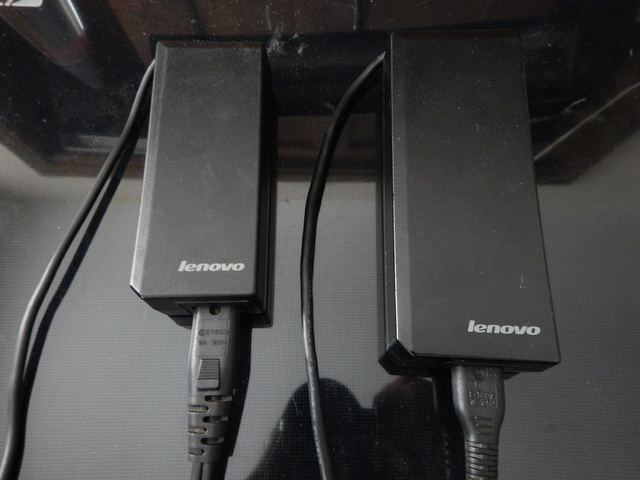 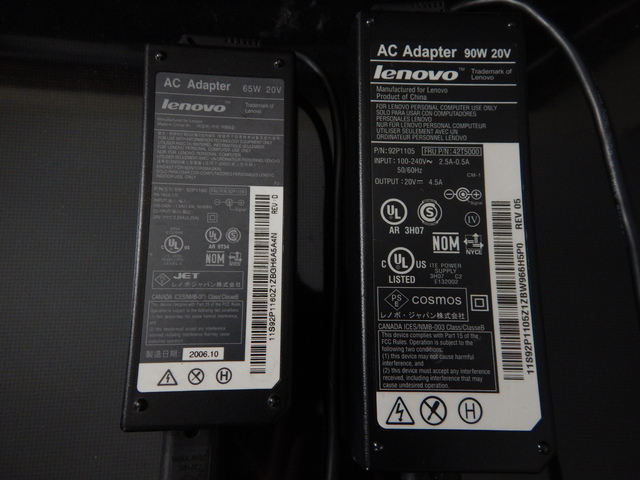 I mentioned Lenovo AC adapters with printed gray lettering, as opposed to colorless engraved. Here we can see two specimens of this style, a 65w and a 90w. The one on the left is a late 2006 model, probably shipped with intel T60, R60, Z61, and X60 laptops. I bought it on eBay and it looks in practically mint condition. I'm not sure about the 90w, it may have had a date sticker at one point that has fallen off. It gets warmer than my other adapters.

One extra adapter picked up today as local pickup eBay order alongside with a ThinkPad Mini Dock which is useful for my T4x machines to connect to my Samsung 1080p TV with no VGA connections supported. THIS, is the rare 4-pin high wattage adapter that comes with the IBM ThinkPad G series laptops.
http://i.imgur.com/1CtWMy5.jpg
http://i.imgur.com/G9ExDs3.jpg
Notice the size difference to a regular T4x adapter!
http://imgur.com/tDGhRmw.jpg
And the connector difference:
http://imgur.com/YIFsW6s.jpg
Well I have bought this adapter separately because the seller doesn't have the original adapter for the Mini Dock and surprisingly enough, the seller still has this G41 adapter which works just fine with the Mini Dock so why not buying them in the same place and pickup together like a bundle? 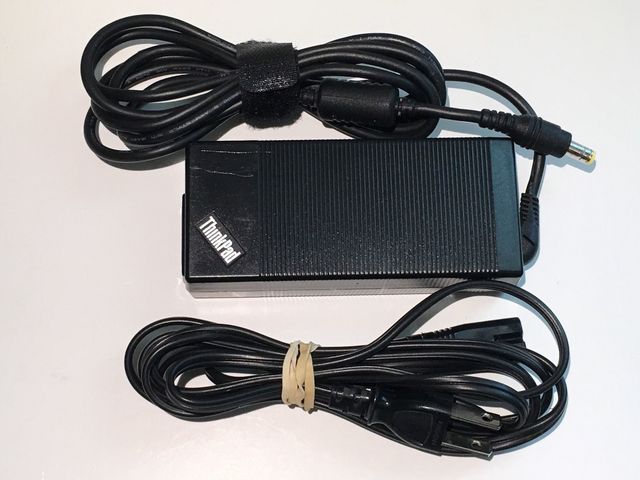 Check this out, an IBM 16V barrel AC adapter with "Thinkpad" badge. The listing.

I got one of those too

Users browsing this forum: No registered users and 5 guests