Here is a little comparison between the A and G series. I have an A22m, A31p, and G41 lined up here for comparison. Originally discussed in this thread: viewtopic.php?f=5&t=129401 however I decided the photos best belonged here, in their own place and in the proper sub-forum.

Embedded are photos at half resolution. Click for double size.

The A22m is the one I bought as a teenager in high school some 15 years ago, but has since stopped powering on. I have a replacement motherboard for it but haven't gotten around to swapping it in yet. The A31p is a system I acquired from a forum member and partially restored about 4 years ago, and the G41 is a unit I discovered on eBay a little under a year after that. The A31p and G41 function just fine - and the original Panasonic batteries still hold a respectable charge after 17/14 years, respectively! 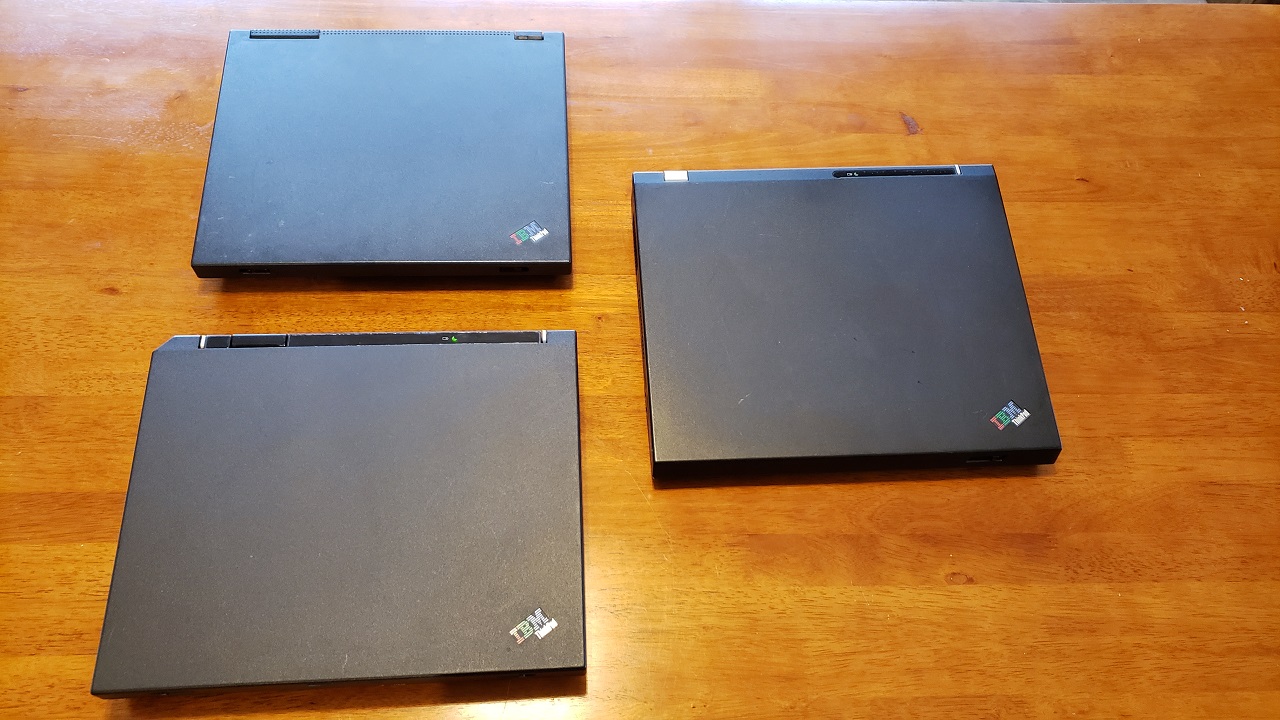 Overall the footprint didn't change much - aside from the obvious 14" frame for the A22m - from 2001's A22m to 2005's G41. Easily discernible is how each line handled the LCD ribbon cable and hinges:

The A22m has two noticeable plastic caps integrated in the top bezel above the keyboard which concealed the hinges as well as the optional WiFi antenna cabling. The LCD cable feeds through a reinforced section of cable left of the right hinge. The charge/standby indicators are on a beveled section of the right hinge cover, allowing them to be visible with the lid either open or closed.

The A31p has stainless hinges that are not concealed, and the optional WiFi antenna cable would feed through a dedicated plastic cap to the right of the left hinge. The LCD cable feeds through a reinforced section of cable at machine center. There are dedicated charge/standby lights on both the inside and outside of the lid.

The G41 continues with stainless hinges in plain sight, but different is the LCD and antenna cables which are no longer clearly seen or concealed under a plastic cap; the cable is merely coiled and contained, with the LCD cable, in a widened section of the left hinge. There are dedicated charge/standby lights on the top of the lid. 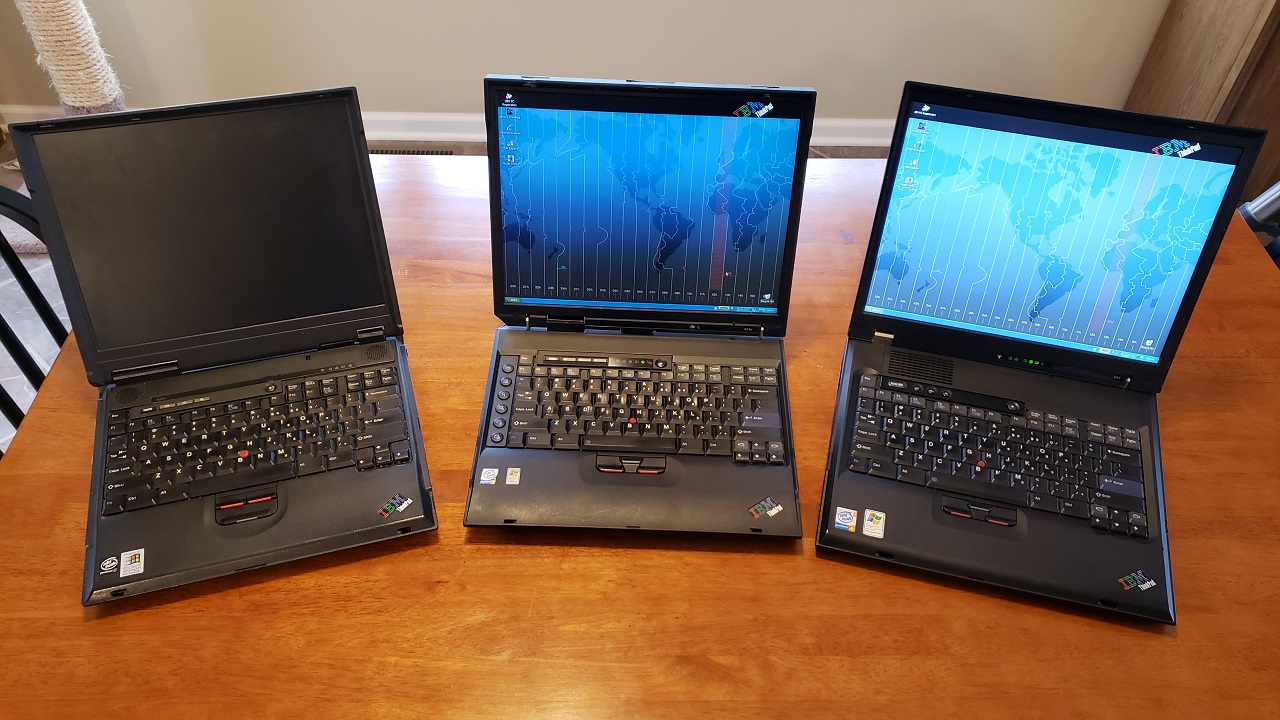 The A22m's LED panel is integrated into the nameplate, on the right side of the machine near the right speaker. The keyboard is the standard layout, however none of the keys are color coded. The trackpoint buttons do exhibit the usual red and blue strips, however, and are arranged with L/R mouse buttons adjacent to one another with the third (scroll) button underneath - double width. The four accessory buttons at the top left of the keyboard include the familiar mute, volume up/down, as well as a "ThinkPad" button. The palm rest is flat and square with a sharp curve at the front to accommodate the shape of the clamshell LCD assembly. Stereo speakers are placed prominently at the left and right above the keyboard, firing up. There are two, independently actuated latches. 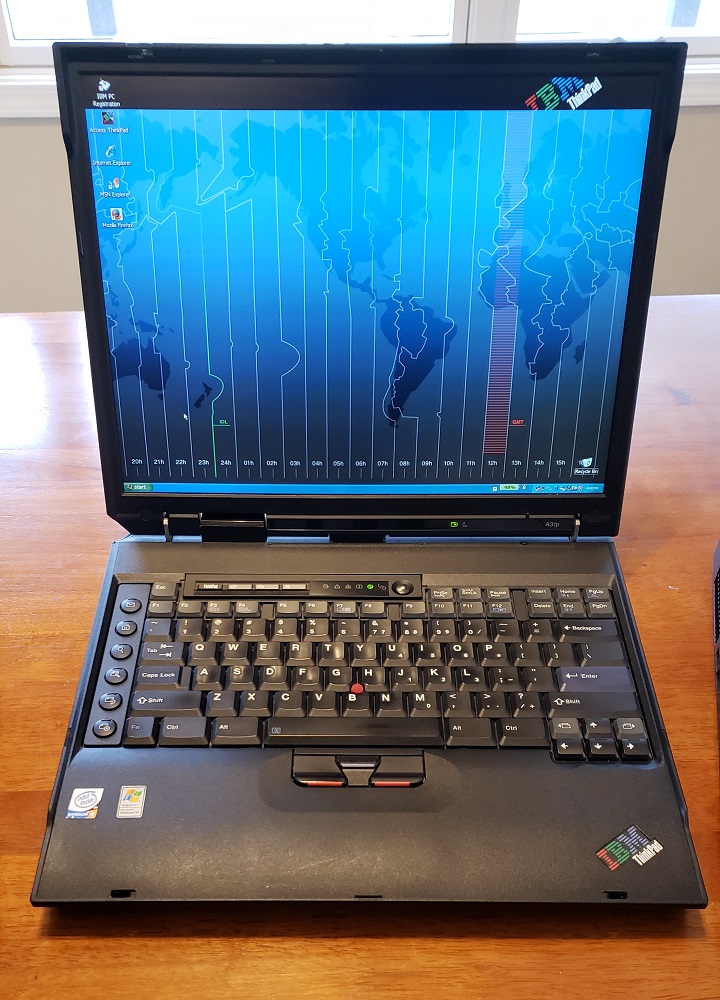 The A31p's LED panel was moved to the top of the keyboard at the center of the machine. Still with us is the standard ThinkPad keyboard layout, however new are the six "web keys" on the far left as well as the color coding of several key groups, as well as the forward/backward keys to the left/right of the up arrow. The trackpoint buttons are now arranged in the familiar left - scroll - right click, still with the red and blue stripe. The four accessory buttons remain largely unchanged. The palm rest is now ergonomically sculpted to an almost continuous curve which is a much appreciated relief on the palm while typing. Stereo speakers are concealed beneath the palm rest at the front of the machine, firing forward. We retain the twin, independently actuated latches.

The G41's LED indicators are no longer on the machine body but now in the nameplate along the base of the LCD. The standard color-coded ThinkPad keyboard and trackpoint is unchanged from the A31p, although the "web keys" seen on the A31p are absent. The four accessory buttons have been updated - round buttons for volume functions and a longer, rounded blue "Access IBM" button to replace the old "ThinkPad" button. The palm rest is a bit of a hybrid between what was seen on the A22m and A31p - more squared off, but still with an ergonomic curvature for it. There is a single speaker embedded under the LCD to the right of the left hinge, firing forward. The two independent latches have been replaced with twin latches actuated by a single release on the right. Also hard to miss is the massive air intake grille for the fan under the speaker - this monster is capable of dissipating up to 88W of CPU TDP!

We're all familiar with what the differences between IPS and TN panels look like, but it's still a joy to look at the A31p's screen - 17 years after it was manufactured it continues to delight. Also seen here is the cap over the "Ultraport" on the A31p's bezel. This was a nonstandard USB connection for accessories, unique to the T2*, X2*, A2*p and A3*p machines. 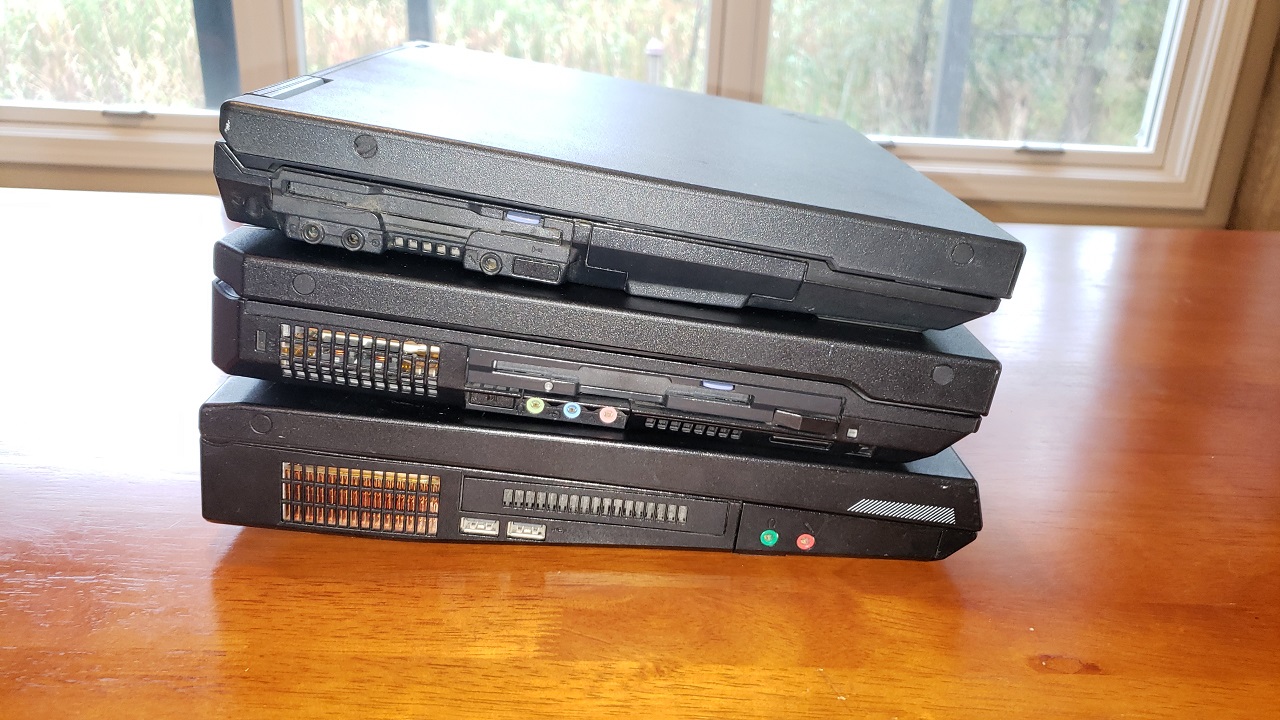 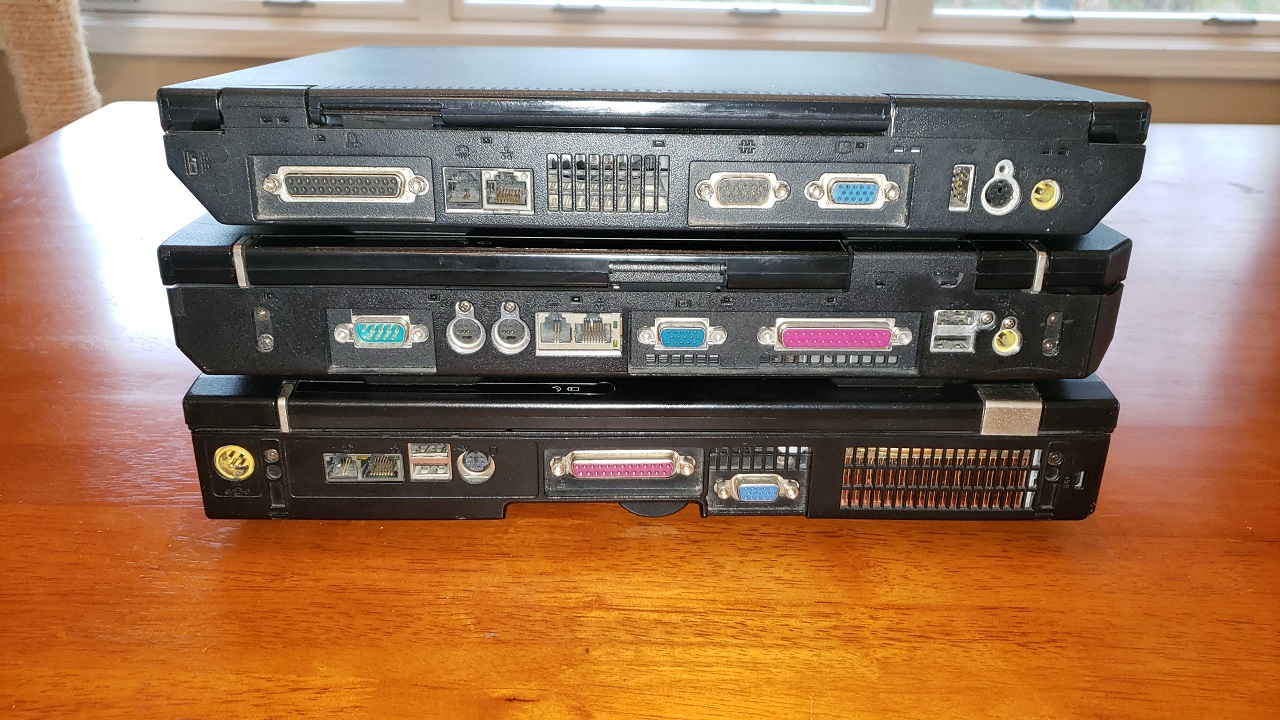 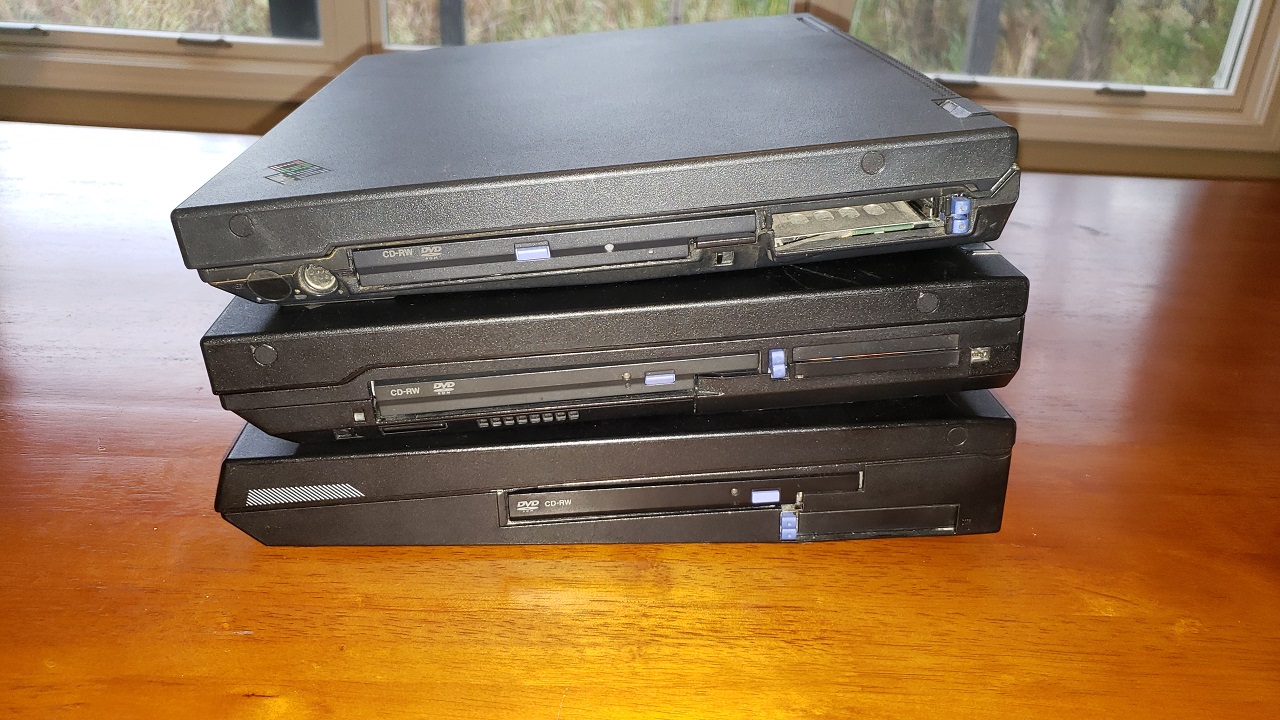 I enjoyed this review tremendously. Well-written, and to the point....

Not to mention that it felt like travelling in time to a large extent, since I've owned similar systems in the past...
...Knowledge is a deadly friend when no one sets the rules...(King Crimson)

Selling off my Thinkpad museum :-/
Top

Strangely I remembered the G41 being a bit bigger than the A31 in footprint, but I guess if it is, it's barely.

theterminator93 wrote: ↑
Wed Oct 02, 2019 5:48 pm
Also hard to miss is the massive air intake grille for the fan under the speaker - this monster is capable of dissipating up to 88W of CPU TDP!

That's why I mistakenly remembered that G4x use desktop CPUs. There is not so much difference in TDP between Pentium 4 and Mobile Pentium 4. P4-Ms are way below in heat, but also in the maximum performance.

Do you know if the PS/2 connection on A2x/G4x can handle both keyboard and mouse with a Y-splitter? Some (many) laptops can do that.

Yes.
...Knowledge is a deadly friend when no one sets the rules...(King Crimson)

Users browsing this forum: No registered users and 8 guests