Nice. What are the programs you have running in your system tray? A larger, clearer copy of this:

My baby girl skying over 14 feet!
5.5K+ posts and all I've got to show for it are some feathers.... AND a Bird wearing a Crown
Top

DavidNZ wrote:Nice. What are the programs you have running in your system tray?

Before the picture loaded I was under the impression that it is a picture of your thinkpad being thrown in the air. I thought, what a stupid idea.

No, I think it's in fact someone stirring a very deep pot of yoghurt...
Ian at thinkpads dot com
Top

ian wrote:No, I think it's in fact someone stirring a very deep pot of yoghurt...

Well of COURSE it will hurt if you put a stick that long in your yog!!!

You should see the stick she uses to whip up some whoopass.

Americans and Brits, separated by a common language!

James
5.5K+ posts and all I've got to show for it are some feathers.... AND a Bird wearing a Crown
Top

Volker wrote:Before the picture loaded I was under the impression that it is a picture of your thinkpad being thrown in the air. I thought, what a stupid idea.

Speaking of "in the air", sometimes this is my desktop:

5.5K+ posts and all I've got to show for it are some feathers.... AND a Bird wearing a Crown
Top

i hate things on my desktop, i hide everything

Blake wrote:i hate things on my desktop, i hide everything

me too hehe
Top

The photo I have for my backdrop was taken when I went with a bunch of buddies on a 50 mile 2 week backpacking trip in the Rockies in 2001.

This is a picture of my desktop with some Windows open so you can see the Watercolor theme I have on my computer:
http://i18.photobucket.com/albums/b132/ ... owopen.jpg 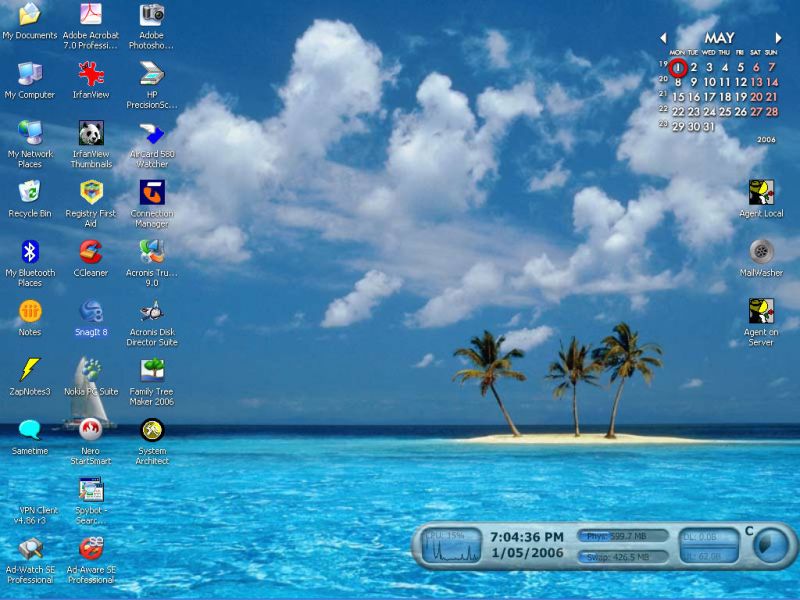 Task bar, with Quick Launch for common Office tools, is set to popup when mouse is over.

The Royale theme from XP Media Centre - I'll eventually get around to minimising the desktop clutter and finding a good calendar/time type of thing (Bill, yours looks neat - where did it come from?

How did you set the remaining battery indicator to display minutes instead of percentage?
Top

one click on your power battery bar.
show-> remaining time when on battery.

It would be if I used it more often...

gunston wrote:i am using Maxthon as my IE browser.
it does not drain the memory resource like FireFox.
not sure about Opera...

You encountered that in Firefox too? Yeah, Firefox had a bunch of memory leak problems; primarily from extension and plugin developers that were a little too careless with the code and leaked memory like a sieve.

Right now, I have gotten it to be a bit better and firefox usually holds steady at 137MB, even with tons of tabs open. Before, it would top out at 550MB for the same number of tabs and windows open; even when you closed them, it wouldn't release the same amount of memory it used to start with.

Also, my background is the standard IBM World Timezone Atlas; also, I am trying out a new background as well...See below

The map of the world, projected onto 2D, with the respective timezones and markers for each plus GMT. Known better as the "IBM Americas Map" with the resolution prefixed.

i have got that too

Been doing a bit of experimenting with the Vista Inspirat skin package - here's what I've settled with for now. It's pretty much set for fast access to my university files. And I'll eventually get the My Docs, My Computer and Recycle Bin icons off there because they're on the Object Dock bar up top:

Plus Rainlendar, of course

I like everything to fit together in a clean, stlyish way. In addition, it should be very usable.

Users browsing this forum: No registered users and 6 guests