This has been discussed a lot on the forum. It seems that the LG Philips 15" SXGA+ IPS panels, one of the common sources of Flexview displays in Thinkpads has a tendency to become dim and yellow with age. I have observed this effect myself, and today have an opportunity to demonstrate it with a few pictures.

I have a T42 and a T60, both with LG SXGA+ IPS displays. I am not sure if it is the exact same panel revision, but definitely close. The one in the T42 is now ~3 years old, and the one in T60 is ~1.5. The T42 panel has been used sparingly during the first 1.5 years (connected to external LCD most of the time), and more extensively since. The one on the T60 has been used sparingly, as the laptop is typically connected to an external LCD.

In the pictures below, the T42 panel is on the left, T60 on the right. Both panels are on maximum brightness. It is evident that the left one is dimmer and yellower, and also that the right side of the T42 panel is more yellow, although the effect is exaggerated on camera.

It is quite noticeable when compared side-by-side, however at this point the T42 panel is still plenty bright enough for normal use, and in low light conditions I even have to turn it down a couple of notches.

I just ran into this issue with my recently purchased T60. Its IPS panel is very dim, even dimmer than my 5 year old T43 IPS panel. So I believe that something is actually wrong with the T60 panel, and that this isn't just a result of normal aging. However, a brand new UXGA panel is in a box underneath my desk now, waiting to be installed.

By the way, does anybody know why this happens? Are the components in the IPS / Flexview panels more stressed, are they more fragile/vulnerable for certain types of light, or what can be the reason? It's too bad, since these are really good screens otherwise. But don't get me wrong: Even the old IPSs are excellent panels, and as long as they don't go any dimmer than my T43 has done so far, they are still good to use even with the aging effects present.
Bjorn
THINKPAD collector. Only missing a proper RetroThinkpad.
Top

Since I still have both laptops here, I've decided to take more comparative pictures. Here in all pictures you see T60 on the left, T42 on the right. 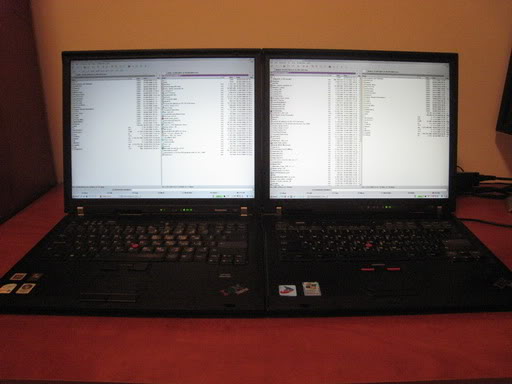 In these pictures, the brightness on the T60 is 4/7, On the T42 5/7. Under these conditions, the actual brightness of the displays is very close, although you see that the T42 is yellower. This shows that the lost brightness over the extra 1.5 years is not all that serious - equal to one brightness notch. In fact, it is far less noticeable below the maximum brightness setting. 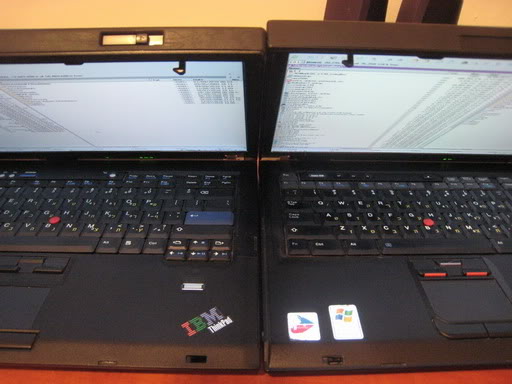 Today I finally got around to swap my dim T60 SXGA+ panel for the UXGA panel I bought. I carried out some other small projects when the laptop was opened up anyway, like change the Ultranav pad and buttons, and install a WWAN antenna in the lid. Right after boot up with the new panel, the screen flickered for a split second and went right into *crazy* resolution, ie. 1600 x 1200. And it was bright.. Wow.

To make a little follow up on this thread, I decided to do a before and after comparison. The way I ended up doing this was to actually borrow my wife's Dell Latitude D820 and do a photo session. This is not scientifically correct, and it might not give an exact comparison, but it gives a slight clue about the amazing difference my new UXGA panel made. My wife changed the panel in her Dell (herself..!) a year ago, so hers is still bright, and to be a non-IPS panel, it's a decent panel, with good viewing angles and colors. I don't know what brand it is.

The way I did this experiment, was to put both laptops side by side in a totally dark room, and opened a full screen Notepad window on both. The 3 first pictures are taken before I changed the T60 panel. The T60's BIOS Display setting is High, so this is the brightest it ever got. The camera is in Auto mode, so it adjusts the exposure according to the brightest panel. So the different pictures can not be compared to each other. 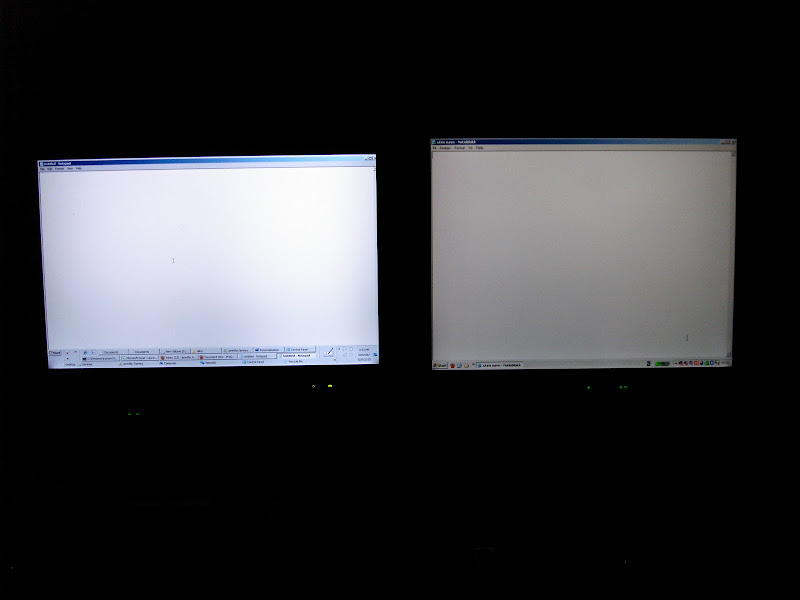 Above: Both laptops at full brightness. This shows how much brighter the Dell is at this point. 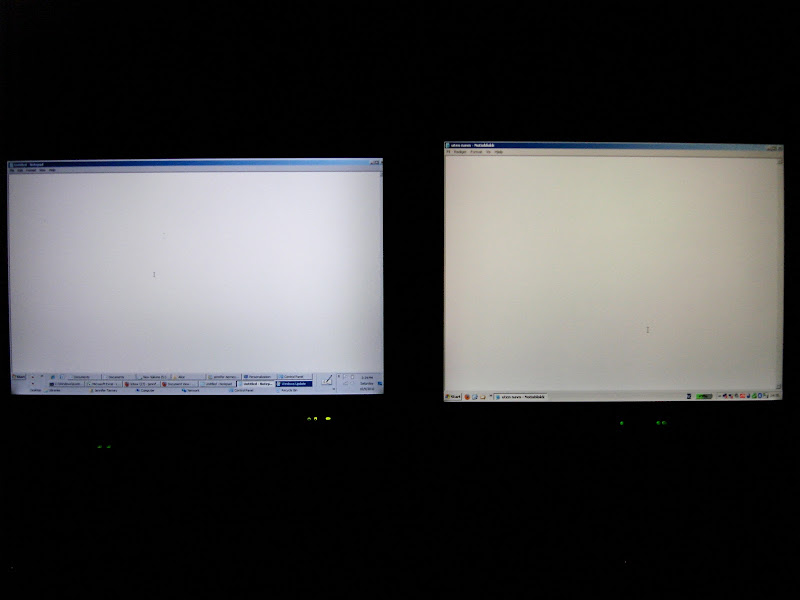 Above: The T60 is at full brightness, while I adjusted the Dell's brightness down to a level where it matched the T60s. That was level 4 out of 8 on the Dell. 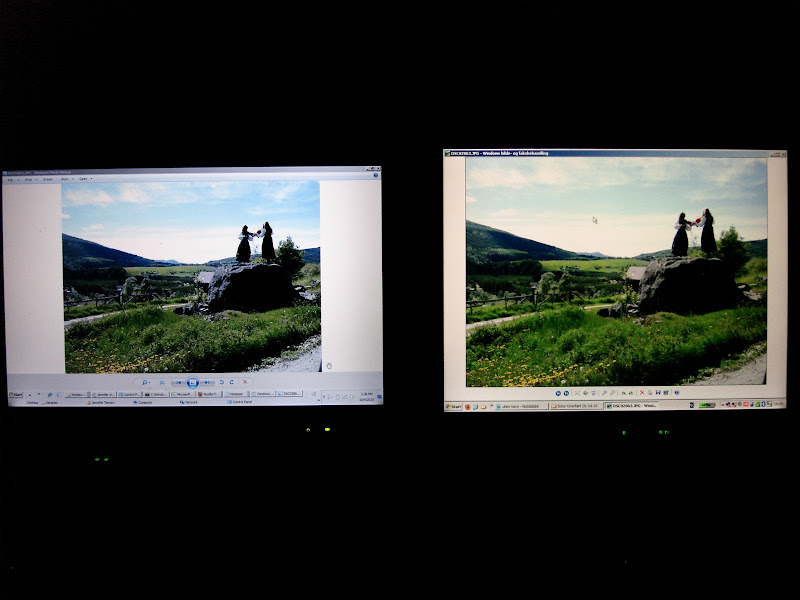 This is the same photo displayed on both laptops, you can clearly see that the T60 panel has a distinct yellow tone compared to the Dell. The Dell is still down to 4/8 here.

The next pictures are taken after I changed the T60 panel. 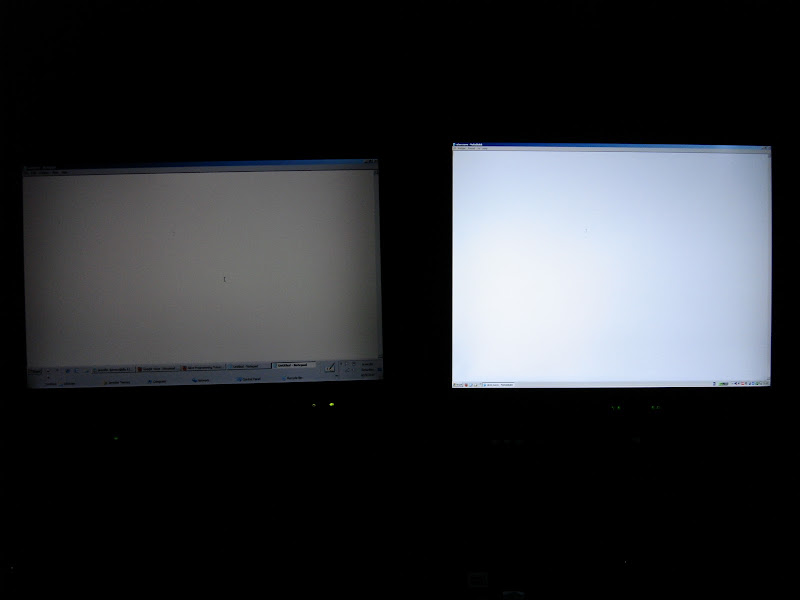 Above: The Dell is still at level 4, while the T60 is at full brightness. Notice the amazing difference.. Due to the camera in Auto, the Dell screen gets really dim here. 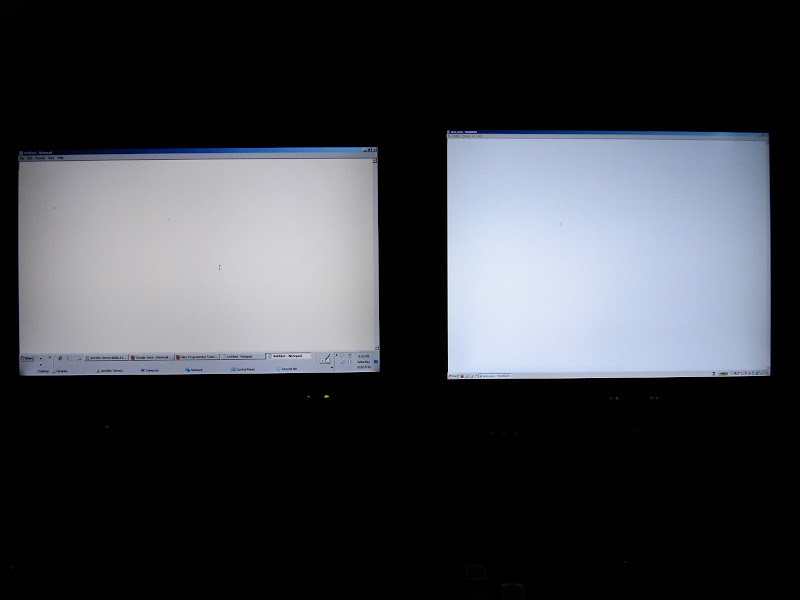 The last picture shows both panels at full blast. The T60 is now brighter than the Dell.
Bjorn
THINKPAD collector. Only missing a proper RetroThinkpad.
Top

Nice comparison, and congrats on the new panel.

The difference is so shocking, I am almost positive that there was something wrong with your original panel beyond the normal aging.

Yes, something had to be wrong with my old panel. I noticed that the screen was dim straight away when I bought the T60, but I didn't know how bad it really was before I compared it side by side with the T43. I think my T43 is probably 1 setting dimmer than the Dell, and from the descriptions given: similar to your T42.

Keep us posted, it's interesting to see both Flexview and non-Flexview panels compared like this.
Bjorn
THINKPAD collector. Only missing a proper RetroThinkpad.
Top

As promised here are the pics. 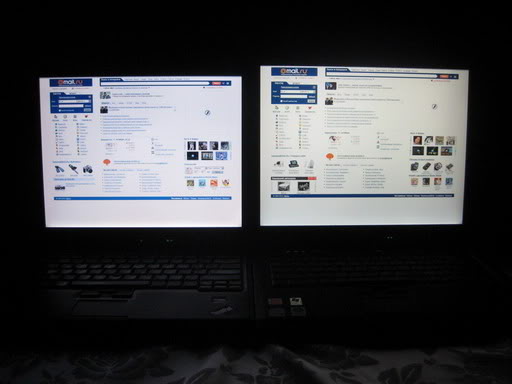 Full brightness, viewed straight on, lit and dark environments. You can see that the newer TN is marginally brighter, but what's much more evident is how it is more bluish, while the IPS is greenish. Note how this same IPS panel seemed bluish when compared to the older, yellowish IPS in the earlier pictures. Just goes to show how subjective our definition of white is. 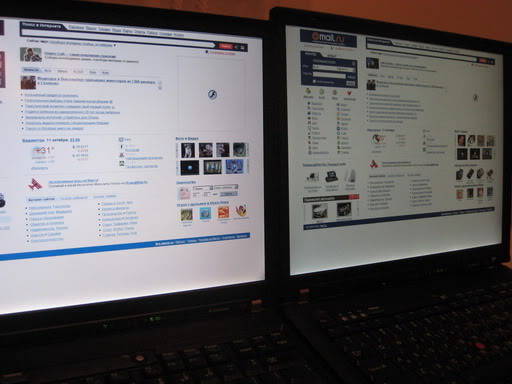 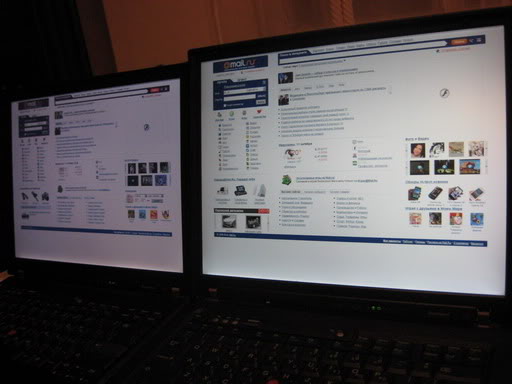 When picture is taken from the side, the screen which is closer to the camera appears brighter. The tint differences are more pronounced this way, the TN actually appears purplish. At minimum brightness (left) and medium brightness (right). Here the differences in brightness are more pronounced, but it can be said that the Flexview merely has a wider dynamic range. Some pictures comparing vertical angles. The IPS stays true to itself, the TN appears washed out from above and noticeably darker from below. While these are not angles one normally views the laptop from, they are still far from extreme. I am very soon going to be in the market for an IPS SXGA+ LCD for my T43. Also a new battery, more ram, ultrabay 2nd HDD adapter and battery and after christmas the final piece. A 128GB SSD! Oh yes, it will be mine.

You have to keep on mind the eye is more sensitive to green than any other color (some camera ccd's are too).

But, if nothing else the last photo illustrates better than all the words in the world the advantage of the flexview display. Good job.
Top

J888www wrote:Some say that the issue is due to LG using a batch of defective CCFL Backlight lamps and the dimness can be rectified by replacing this CCFL lamp. Cannot record from where I saw the post but the replacement had positive results.

Is it a defective CCFL or is this simply how CCFL age?

My 5 year old Hanns-G LCD desktop monitor also had yellowing and low brightness until I replaced it with something more modern.
I'M DONE WITH THINKPADS, JUST DONE!!!
Top

Defective. Cannot confirmed to be definite, lets just say that the LG Flexview screen dims over far shorter period of time than other manufacturers.

Just removed my T60p LG LP150E205 (A2)(K1) SXGA+ panel, then removed the CCFL backlight tamp (still waiting for the replacement lamp to be delivered). I didn't check for which layers are held within the groove of the metal strip which holds the CCFL lamp

so have to guess that it only encapsulates the "glass" layer.

Finished replacing the CCFL two weeks ago but couldn't test as I was waiting for my upgrade components to arrive.
To my great surprise, the LG FlexView works, it is not as bright as the BOE Hydis HV150UX1-100, but it is as bright as the screen of my DELL XPS, no more "Yellowing". So I can confirm the defect lies with the LG CCFL.

The whole process was not easy, I surmise it is definitely worth trying to revive an old screen panel but because there were so many things which could have gone wrong I also advise to purchase a new screen instead,

Strange that this panel worked when I did not believe I would succeed, also my T7600 CPU had misaligned pins also worked. Unfortunately, the item which I had most faith of a successful upgrade was a failure, the Atheros wireless N card did not even register on the system.

NB: Best to purchase a CCFL which have the cables already soldered, and to all who may make an attempt of this replacement, you can be sure it is possible but it may not be successful, good luck.

Can you help with model / part number of replacement ccfl for 15" SXGA+ LG panel?
How you find replacement ccfls?
It's about 5 years passed and i understood that brightness of my T60 have gone (but it not become as yellowish as yours)... May by my T60 have taken good CCFLs, but time have gone...
Top

i could use that changing CCFL advices too ... i recently buy a cheap SXGA+ but its yellow wich is extreamly annoying during long work in word :/