Hello everyone!
I'm completely tired that my X220 on with i7-2640M CPU heats up to 96 degrees very often.
Heatsink from X230 and Arctic Cooling MX-4 thermal paste does not help.
And it feels like something is strangling my X220, I have a neighboring laptop with i7-2620m CPU, it works smoother and even at resolution of 1600x900.

What type small copper plates can I order for cooling?
Tell me the best thermal pad for cooling the chipset.
I have already chosen the thermal paste, this is Thermal Grizzly Kryonaut.

I'm tired. I want myself some kind of thinkpad with last good and stock i7-4712MQ CPU.

Hi there, not much experience with thermals - my X220 just runs I never bothered to check the temps - the fan noise is not too annoying..

But the folks over here are mentioning some "AVC" heatsinks.. Does anybody know what they are/if they're good?

I want myself some kind of thinkpad with last good and stock i7-4712MQ CPU.

Is that what T440p can sport? T440p is nice and can take latest low energy IGZO panels.. On the other hand if you still prefer X220 form factor and keyboard that i7-3615QE (this is what the reddit thread linked above points to) has a CPU rating of 5174 on www.cpubenchmark.net while i7-4712MQ is just a notch above at 5199

The T440p seems to be my dream

I'd give both reddit and this forum a search via any popular search engine..
People have tried all sorts of CPU-s in t440p

Well now we have the option thanks to those motherboards with quad cores soldered on!
A bit expensive, especially inclusive of 20% UK import VAT but not impossible..
I'm abstaining so far though, mostly due to price

Interesting question.. I would probably check ebay, possibly watch a couple of them getting sold to see how much they're going for.. My gut feeling is between $120 and $200 but I find it hard to be more precise. Amount of RAM installed, presence of SSD would probably impact the price - a little. I guess people on ebay might be more willing to buy if you offer a fresh licensed Windows install. I guess they may prefer Win 10 but I don't know how well Win 10 works on X220 - I'm a Linux person. Overall cosmetic condition will matter too.

We have a Marketplace section on this forum too - you will need to specify the asking price and give an idea of postage expenses, link to photos. An "FS" (for sale) advert on this website can stay on indefinitely long - I think, though of course it will keep scrolling down the forum without responses. You can gradually lower the price if you like too by editing the post and posting updates to UP it if you like.
X220, 2 *T520
Top

If you've done all you can hardware-wise (change thermal paste, clean heatsink, replace heatsink, etc.) and not find a solution, what you can do is reduce the maximum clock speed of the processor and the built-in graphics. On Windows, decrease the max processor state to 99% to disable Turbo Boost; you may set it to a lower percentage as needed (between 75-80% usually yields a good balance between temperature and performance).

Haven't tried controlling the graphics performance, but adjusting this setting may work: 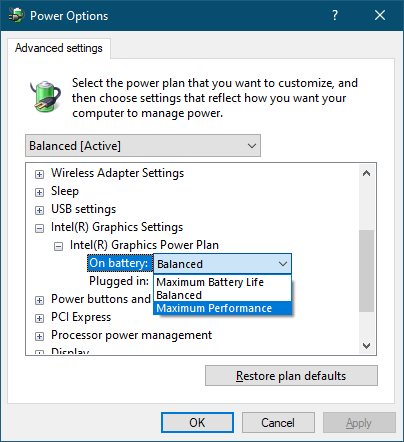 If you're running Linux, install TLP, then change the following settings:

First off, delete the leading # to enable the setting, then change CPU_BOOST_ON_AC from 1 to 0 (zero), This disables Turbo Boost.

You can determine the available speeds by running

on a root terminal.

To apply the new settings, run

Ah, yes. Fan control. Something I often forget since I only need to do it right once, then just copy the config file to the new install.

After sitting and thinking, I came to the conclusion, that it was pointless to sell mine pretty X220, since I invested a lot of money here and I was lucky with the purchase of some components tho.
I will order another motherboard with i7 2640m same CPU. I think I will do it with Aliexpress, because eBay isn't an option. I am sure, that this thing will be the most reasonable approach to this situation. I need to use my second laptop (it is not thinkpad or lenovo brand) for now, since my student budget does not allow. Most likely I will do it closer to autumn and before winter

I'm still rocking an X220-- heck, I'm actually typing this post on my second one.

Thank you everyone for help, i forgot to say

Good day everyone!
Well... I don't know how that's good to say, if i bought some ThinkPad T440p finally, how glad I am! He looks really like new.
Honestly, I was shocked when I i could see i7-4710MQ processor in Task Manager instead of the "typically expected" i7-4600/4610M.
I will anyways downgrade to i7-4712MQ. I have very good reasons for this. Discrete green card - GT 730M with 1GB DDR3 is present. I even got the keyboard backlight

But!
I’ll think about where to attach my X220 with i7-2640M, I don’t know yet. But the "soul" discourages selling something. The motherboard has not yet arrived

Good night, mates!
Got a great used ThinkPad X220 motherboard with i7-2640M CPU from AliExpress, check out my situation

When the laptop is assembled, that CPU is still going up to 96 degrees (limit) while gaming and gets something called "throttling".

However, this processor does not have any powerlimits, which can be used to work on it. I mean absolutely no any limits in Throttlestop could be seen. Yes, i know about BD-Prochot (T-junction).
I think the problem is cooling area. With that motherboard i got also a 3pin fan from Х230 (works like ez in 4pin socket).
For now, i disassembled the laptop from A to Z, took the motherboard out of the case and put it on the some canvas, connected everything and started it - surprisingly, the CPU does not warm up in games more than 70-85 degrees. Now I went to a random page in Google to load the CPU for online, I've been driving it for 1 hour - the processor does not heat up more than 91 degrees, being stable from 88 degrees ( by the ThrottleStop indicators) at a frequency of 3.2ghz (mostly) and 3.3ghz (in places).
I could be a bit sure, that china thermal pad from aliexpress on the chipset does most effective cooling, but The MX4 thermal paste isn't problem either, trust me

On all my devices, i don't using thermal paste like (bruh) GD900 and noname thermal pads

Can someone help me to maximize cooling system in my X220? Maybe i could bring some: thermal pads, copper foliage, copper pads. How to put them right? Does it help to put many possible thermal pads on heatsink?

Does Lenovo stamped out the top packages of X220 with I7-2640M and already throttling? Because cooling heatsink in X220 a bit lower than X230 and who know's what kind of thermal paste that was.
...

I can't sell my X220, because this machine is unbelievable

Small update:
T440p: I already installed an I7-4712MQ processor and expensive thermal paste Thermal Grizzly Kryonaut. The laptop is very cold. Has never reached critical temperatures. At rest, with the opening of many programs, the fan in the cooling system works passively, and on stock heatsink since 2013. I think this is the maximum level of this cooling. Considering most balances (TDP <-> effective cooling). I have no idea how do guys put i7-4910MQ like and etc.
In principle, the laptop is ready. I changed the touchpad from clunkpad to a normal one. Now it remains to find a working fingerprint and go to the side of upgrading components such as RAM (16GB DDR3 2133MHz) and large SSD volume.

X220: Expensive thermal paste did not help. Additional radiators that I ordered from aliexpress are quite difficult to install. Thin radiators did not come.
I will order soon delta-type heatsink. I'm going to look at other small radiators. Still disassembled

That was expected TBH. That's why I've been considering liquid metal.

Thanks. I will take this moment into future, if there will still be no success

dr_st wrote: ↑
Tue Jan 11, 2022 4:08 am
Why do some X220 overheat worse than others? I have an X220 w/ i7-2640M, and while it sometimes runs hot when under load, it does not get over 90C very often. I wonder if it is a hardware issue due to specific problems with heatsink, thermal paste - or is it various workflows, even if all show 100% CPU load, still differ on the amount of stress they cause on the CPU (and the subsequent temperature increase).

I just ran a little test - took my X220, docked (on Ultrabase) and plugged in, ran 4 instances of an endless loop batch file (to get CPU to 100%) and monitored temps with TPFanControl for about an hour. It never went above 83C, and at some point went down to 78C and stabilized there (fan was at BIOS setting, running between 4500 and 5000RPM at peak).

Users browsing this forum: No registered users and 19 guests