So I got an X201T a couple of days ago and I faced a lot of issues. I couldn't make my touscreen work for the first few days and I've spent making my Gobi 2000 card work on it. I managed to get it all to work properly and want to share all of the issues I faced and adequate solution for them. This will consist of two parts, the touscreen / wacom part and the Gobi 2000 part.

If you start booting up Ubuntu, try to move around your stylus in the pre-login screen and during the login. It should work but for some reason it stops. If you have this then your stylus is working okay and you have no hardware defect, it's just the software which is causing an issue.

The issue persisted because the user I was logging in, despite being an admin didn't have access to the serial ports, so I just needed to add the user to the dialout group.

To check if you're in this group do:

If you don't see dialout in the output of the command, do:

This should add you to the dialout group. If you reboot you will probably have the stylus and touch working.

Now, it happened from time to time that the touchscreen and stylus just stop working when you're logged in. The jump-start it up, I created the following .sh file:

When you run it, it will ask for the SU permissions and hopefully after that your stylus will be back on.

Note: if you want to change your stylus settings, you HAVE to use the .script because for some reason Ubuntu settings aren't picking up the stylus natively.

Even if you have a Gobi 2000 card, it doesn't mean it will work without an unmodified BIOS. Even though my Gobi 2000 doesn't SAY it's HP based on the PCB or stickers, it still is HP based and my BIOS didn't want to boot up with it. What I needed to do was to first install a modded BIOS. You can get the BIOS which is working on my X201T on the google drive provided above. It's the only ZIP file in there. Just extract it, go to 64bit of 32bit and run WinPhlash.exe (I recommend having a second drive just for a temp Windows installation, Windows 7 will do just fine).

After the reboot you will most likely hear 5 short beeps, pause and another 5 short beeps. Your system will turn on and then you should go disable some chip verification in the BIOS settings to remove the pesky beeps on every boot.

After this you should be able to boot up your system with the Gobi 2000 card plugged in.

Note; you MIGHT need to be in the dialout group so look at the section above to add yourself there...

To know what kind of your Gobi card is, just run:

My output had this:

Note that HP Gobi cards end with 241d when they don't have the firmware loaded.

As you can see my Gobi card is an HP one.

This means that we HAVE the gobi card being read but it doesn't show up in the network manager, what gives? The Gobi 2000 card NEEDS to run windows based firmware in order generally communicate.

If you have a Lenovo or HP Gobi card you can skip the following step and just download the Lenovo or HP folder in the google drive.

Usually you get the firmware files by installing the drivers for it on windows (or wine, but wine didn't work for me) and running the following command:

Once you have done that, go to your OUTPUT_FOLDER/Images and then go to your Gobi 2000 vendor. This can be Lenovo, HP, etc.

Copy that folder and switch back onto Linux.

Now you will need software in order to have your Gobi card running:

After that, go to your vendor folder you copied from Windows and:

After a reboot, your card should start working!

Here's proof that I have the 3G connection working: 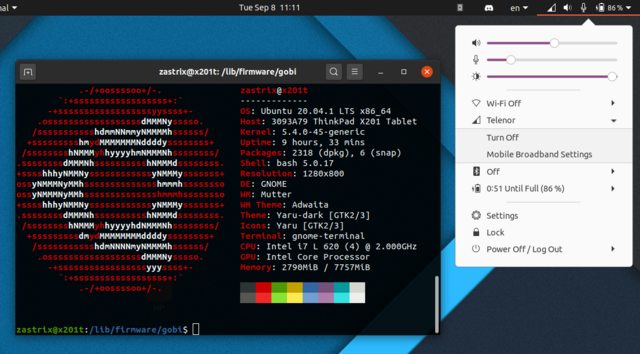 Re: Making X201T work on latest Ubuntu, including touch, Gobi 2000 and modded BIOS

Users browsing this forum: No registered users and 14 guests