I hope you ladies and gentlemen will excuse me (L40sx question)

I hope you ladies and gentlemen will excuse me (L40sx question)

Since my question is not 100% thinkpad related (but i think some of you might have this good old machine in your possession...

I also asked this same question to the good people over at the retro FB group, but doing that, i might miss out on some good insights from members here.

so i got this unit home today (wanted it basically to replace my keyboard on the existing unit to the proper key layout). I got it fairly cheap (¨55usd) includig power supply and to my small surprise, it also came with the (special 8x2 simm memory expansion onboard as well as the modem-card). But i bought it also knowing that it had an issue with the screen.
When firing it up (the HDD is dead btw, but those old Connors usually are) i can see that the screen only displays on half of the screen.
When i bought my first L40sx, it had other issues (flickering mainly) but a recap of the screen solved that perfectly. But in this case, would it be the screen cable itself that is broken? I got some advice about the screen being driven on dual planes (and the schematics support this, having two connectors for the screen), would a new cable be required? 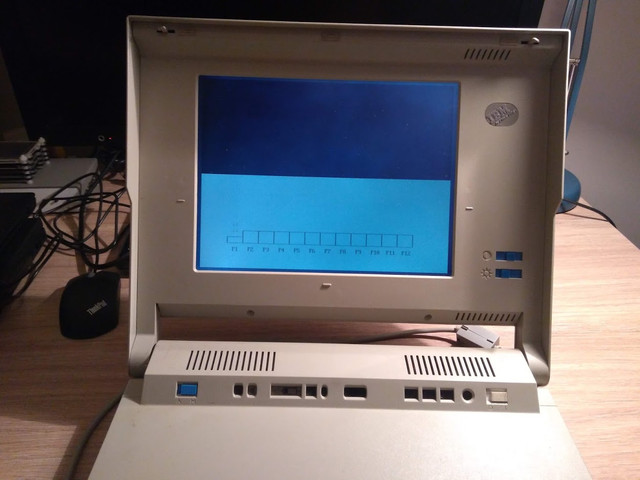 Re: I hope you ladies and gentlemen will excuse me (L40sx question)

If I read your post correctly, you have another L40sx.
Why not try its LCD-cable in the "new" one?
Or try the "new" LCD in the "old" machine?
After first checking that both parts of the LCD-cable connector are properly plugged in...

Did you get the numpad with it?

NOT a great day for a Guinness! (the Real Black Stuff).
Ireland is on FULL lockdown till December 2020!
Covid-19: Mask it or Casket!
Check out The Boardroom for Mods and Other Services.
Top

Re: I hope you ladies and gentlemen will excuse me (L40sx question)

unfortunately i did not. But it came "loaded" otherwise which is quite nice.

But i located the problem (sort of) or at least its "whereabouts" of sorts. The two mainboard connectors were pristine so i started prodding around on the screen itself. Lo and behold - after poking around just beneath the "IBM" logo on the screen, it sprung to life on the top-part as well. Now i know where to focus the efforts. On that right-hand side is the control-pcb for the screen, including the capacitors (which i changed on my other L40). I don't think the caps are the culprit here, but i will break inside it and check the cabling going there since it must be where the connectivity is lacking. Will also check the capacitors of course.

Users browsing this forum: No registered users and 30 guests