Use this Forum for the ThinkPad hardware you have for sale or want to buy.
Sorry, no commercial sellers allowed here without asking Bill
Post Reply
21 posts • Page 1 of 1
Message
Author

this is the other car..

it is one of450 odd series 1 AML sedans in existance..
all custom built by Aston Martin Lagonda..
a truly hand built automobile..
described at the time as a ferrari masquerading as a rolls royce..

in short, this car is lower, faster and meaner than a bently turbo..

want pictures and history, check out awww.astonmartinlagonda.net..
mine is chassis # 13280 and is in the list..

I can't seem to find a picture of your car. Can you give us a link? I found it listed on the sale page, but there is only a description, and contact name.

BTW this car is huge (for my European eyes), and kind of futuristic, but looks interesting.


G-Man wrote:I can't seem to find a picture of your car. Can you give us a link? I found it listed on the sale page, but there is only a description, and contact name.

BTW this car is huge (for my European eyes), and kind of futuristic, but looks interesting.

Yes, they're enormous to EU eyes, merely large here in the land of the SUV.

heh, heh..
most anything is large in european eyes, even though these are very popular in the UK, europe and the US..

i won't remark on SUV's except to say of the millions guzzling the last drop of fuel, only about 2 are actually used for more than hauling a bag of groceries..
Bill Morrow, kept by parrots

morrow wrote:i won't remark on SUV's except to say of the millions guzzling the last drop of fuel, only about 2 are actually used for more than hauling a bag of groceries..

Now, now! Four out of our five are used properly!

Besides, do you expect me to sully the interior of the 6.9 with groceries?!?!

JHEM wrote:
Now, now! Four out of our five are used properly!

Besides, do you expect me to sully the interior of the 6.9 with groceries?!?!

no, silly, i expect you to use the trunk compartment..!

morrow wrote:no, silly, i expect you to use the trunk compartment..!

Can't, it's full of Krugerrands!

touche'..
but i'm afraid you'll need those gold coins to pay for a tank of gas..!

in defense of the aston martin it is a singular auto..

much like driving a race car with a rolls royce style coachbuilt body..

Does it have a working battery? Is the BIOS up to date? Are downloads of all the drivers readily available?

Ray Bayles
Only those who attempt the absurd
can achieve the impossible.
Top

touche'
yes, the battery works.. and new tires too..

it is the LED dash that is troublesome..
Bill Morrow, kept by parrots

raybay wrote:Does it have a working battery? Is the BIOS up to date? Are downloads of all the drivers readily available?

since i see this thread is still hanging on, here is an update..

i sold the gold colored car and bought a white one with 12k miles..

these things have a computer that is old, old, old..
running a Z80 cpu (zilog, enhancement of the intel 8080)..
on non-gold plpated, non solder masked, cheap sockets (all the chips are socketed), proprietary backplane computer..
running machine language 8080 code that is juvenile at best..

SO, it might JUST HAVE a cmos battery (not really!)..

got to run out now and get a part made for this neat car..
Bill Morrow, kept by parrots

Do you still have the Lagonda? Was curious what CPU it had, taking a distraction from reading about Time Magazine's Worst Cars of All Time list.
http://content.time.com/time/specials/2 ... 45,00.html

heh..
you have unearthed something from the dimmest past..

swapped the archaic computer for some modern aftermarket instruments.. digital of course.. then got old and tired of messing with cars in general and sold that lagonda for much cash..

i still have some misc. parts from the crashed car i owned and sold to a fellow in canada for less mucho cash but at least what i had in it plus the parts i used and kept..

what was your question again..?

Z80..? the people who made that computer for aston martin were in texas and did not want to see onw of their creations ever again..
i sent one in for repairs and got it back shipping collect with a terse note to never send it back to them..
their bad custom product nearly destroyed aston martin at that time but in those days (the late 1970's) micro computers were no where near what they were a few years later..

so the Z80 was hot stuff when they used it..
zilog was hot stuff too..
so was gavilan computers.. a spinoff of some zilog guys.. google is your friend..

i guess i can't fault that texas company but they should have owned up to their creation and at least fixed the d@mn thing..

edit:
ok, so i looked at the list of worst cars of all time and it is amazing how many on=f them i drove or owned or were owned by family members..
the AMC pacer was a nice bubble car.. lots of glass.. wife #2 had one.. delorean, i test drove one when they were new and hot at a dealer in san mateo.. the lagonda you know about.. wife #3 (current wife of 31 years!) had a fiero with that iron duke engine.. GM replaced it and thereafter it burned itself up.. sister had an XKE jag V12 which i drove a few times, once across the richmond/san rafael bridge at 130 mph (3am, no traffic), nice car, she gave it to her son who promptly sold it to a man in new york for $$ to buy some crummy boat.. the MG twin cam..! i had a new one in 1959.. it had a recall for engine issues.. when i bought it from british cars of burlingame i traded in my 1948 jag mark IV salon.. (again, google is your friend).. the edsel was just a mercury with a different front end and buttons in place of shift lever.. the chrysler imperial thing i drove when i had to fly to LA for business and rented it.. big sloppy car.. at that time i owned a '66 XKE and that imperial did NOT handle like the jag..

so, there you have some ruminations if yo got this far in reading..

I always wanted a MGA but never actually got one. They were getting hard to find when I wanted one. I probably would have settled for a TR2 or TR3 but they were scarce also.
Only managed to have a TR4 and an Austin Healey Sprite which were more boxy shaped. Lenovo did to Thinkpads what Leyland did to Sports cars. IMO sigh...
Active --- Love the X series
X301 W 7/Mint | X201 540M L Mint | X220 2520 W7/Mint

Here in the USA I first had a Ford Explorer V8, but I exchanged that gas-guzzler in 2009 for a more economic Hyundai Santa Fe.
That 2005 car currently has 126K miles. Since my last oil change in July '16 I have only driven ~1600 miles.
Boring, but that's all I need nowadays.
Top

as one ages ones brain begins a memory dump..
beware the cascading bits and bytes..

citroen 2cv.. french farmers use those to go to the high street and then back to the farm to use them to plow the fields.. at least in 1955/1960 era..
never drove one but the dealer in SF, dick feder, had one or two in his shop..
Bill Morrow, kept by parrots

I remember the yellow model driven in For Your Eyes Only 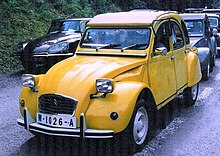 I don't have any pics of my MGA, it was not a twin cam, which I saw referenced as one of the top 50 worst vehicles of all time. Mine was a '61 with 1600cc engine. However, here I am running away from the last MG I ever owned.
"she's gonna blow!!"

For Bill's Eyes Only: Aston Martin Valkyrie
(provided you have a few pennies to spare...)

PS: be interesting to see how you get in...
Top

Interesting car the Aston Martin Valkyrie and a 6.5 Litre V12 engine made by none other than Cosworth. Even more interesting is it is normally aspirated.

my days of exotic automobiles have given way to reliability and cheap to fix..

so a 70's chevy sounds about as good as that aston martin..
Bill Morrow, kept by parrots

Return to “Marketplace - Forum Members only”

Users browsing this forum: No registered users and 17 guests