I have replaced Synaptics touchpad from T450 to my T440s. I edited Synpd file like the tutorial saying, installing driver but after restart, 3 touchpad buttons didnt work. What should i do? What im doing wrong? 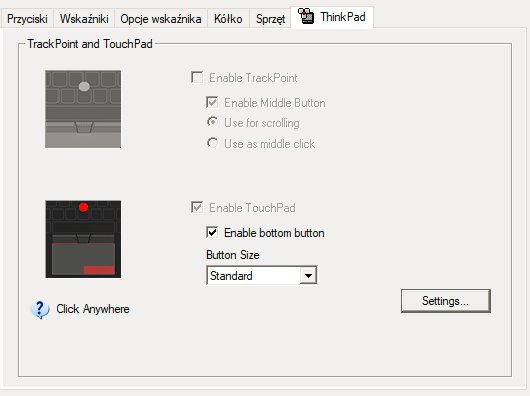 Longtime forum lurker here; just wanted to say "thanks." I recently upgraded my T440p with a Synaptics touchpad from a T450s using this guide. It's a tremendous improvement to the feel and functionality of the machine. I followed the steps to prevent Win 10 from updating my drivers, and everything worked perfectly.
Top

Just updated to v2004...getting "Synaptics device not found!" any idea how to get around this and install the Synaptics T450 driver???
Top

Hi having the same issue too. The 3 buttons are not working. Bought mine from the UK. Synaptics. How do we get it to work? Followed the instructions and installed the drivers.
Top

My T440p kept updating to the unmodified drivers that don't recognise the buttons. First time was because of Lenovo Vantage, which seems to ignore the group policy settings. If you have Vantage installed, make sure you turn off automatic updates. Then it happened again after windows updated to version 2004, regardless of having the group policy set to not do that. I just rolled it back to the previous version and it's working properly again, for now at least.
Top

I'm afraid I did not succeed in following the above description. Besides the fact, that the newly (and properly) replaced Touch-/Trackpad is not recognized at all (and does not react in any way, no click, no touch), the Installation the rewrited Synaptic-Driver does not work out. The information is as follows:
https://postimg.cc/nMnChX26
Top

You need to allow for installation of unsigned drivers. There's some instructions for this in one of the posts above, but I found the easiest method is to go into Windows powershell (Admin) and enter

then reboot. You should be able to install then drivers then. Don't forget to go back to powershell and enter

When you're done.
Top

Thanks for the hint, managed to install the driver -- but appears, that the newly connected touchpad isn't recognized at all. Maybe I was supplied with a non-working piece or the cable is not working. I'm afraid, I can't do this myself.
Top

Try carefully reattaching the touchpad cable on both ends, make sure it is in STRAIGHT.
Still NOT a great day for a Guinness! (the Real Black Stuff).
Ireland is on FULL lockdown until at least 31 January 2021!
Covid-19: Stay safe, so Mask it or Casket!
Top

Followed the mechanical process again, reattached the cables -- it doesn't work.
The problem might be that I am using the old cable (in lack of a new one, which was not delivered with the touchpad), while the old clunkpad had NFC with a dedicated cable, while the new one hasn't?

Try installing the Alps driver.
And try to not connect that NFC.
Still NOT a great day for a Guinness! (the Real Black Stuff).
Ireland is on FULL lockdown until at least 31 January 2021!
Covid-19: Stay safe, so Mask it or Casket!
Top

Tried that, didn't work out neither.
I will extend this troubleshoot now in purchasing another touchpad -- this time with a new cable. I will keep you updated with my ... progress?
Top

Now, after having destroyed the Windows-Key on the keyboard and having replaced the old Touchpad-NFC-cable with a new one, without NFC connection, everything works just fine! Thank you all! The feeling is great, may my T440s be a faithful companion for the upcoming years.

For all who may want to replace their Clunkpad in the future, my little contribution may be this: Make sure, that you replace an NFC/Touchpad cable with a Non-NFC/Touchpad cable if mounting a non-NFC touchpad.

Ok, sorry, it's me again. Everythin worked fine -- until today, when the three keys or buttons as well as the trackpoint ceased working. I protected WIN10 from overwriting the drivers previously via the Group Policy Editor and there is no new driver I can recognise. The Synaptics settings via the mouse settings are there, I can still enable and disable the trackpoint, but that changes nothing. Any thoughts on this?
Thanks again from Berlin
Top

I have done all the instruction for synaptic touchpad, I have working 3 buttons (middle button scrolling) but unfortunatelly no two fingers scrolling which is one of my favourite feature

I dont even have synaptic overlap in mouse device window.
Does anyone have the same issue and figured out how to deal with it?

UPDATE:
Please follow this guy and use Enforced driver install method. It worked for me like a charm!
https://www.youtube.com/watch?v=iap3qJKpR84&t=310s
Top

Thank you for the answer, but what is the different between video and method described on the first page from this forum?
Top

Did you guys use the indicated W7/W8 jbgc28ww.exe driver and installed that as per instructions?
And did you stop W10 from screwing it up, also as per instructions?
Still NOT a great day for a Guinness! (the Real Black Stuff).
Ireland is on FULL lockdown until at least 31 January 2021!
Covid-19: Stay safe, so Mask it or Casket!
Top

First of all: thanks so much for the detailed instructions RealBlackStuff! You are making the world a better place by enabling people to get rid of those clunkpads, haha.

After a few hours of trying different drivers and configurations I found the issue: the flex cable of the trackpoint had come undone during re-installation of the keyboard. Apparently that causes the Synaptics driver to disable all trackpoint function, including the three trackpoint buttons. After reconnecting the trackpoint cable, both trackpoint and trackpoint buttons worked without driver (but no scrolling obviously). Out of laziness I tried a simple installation of a driver that had been recommended to me by the supplier of the touchpad and all works like a charm!

The driver I'm using is n10gx25w (http://download.lenovo.com/ibmdl/pub/pc ... 0gx25w.exe).
Let's see if this is a longterm solution, otherwise I am sure the instructions posted above will work.
If anybody is struggling to find a German supplier of Synaptics trackpad: I was very satisfied buying it here: https://sperber.it/Trackpad-T440p-T450-T460
Top

has anyone been able to get this work w/ the latest windows 10 update (20H2 build 19042.685) [Thinkpad t440p]??? I've been holding out on updating cause it breaks the trackpad (2 finger scroll and the trackpad in general is fuct) (Synaptics). so frustrating....is there a workaround

1. Download this W7/W8 Synaptics T450 driver from Lenovo, do not install yet!
==>> https://download.lenovo.com/pccbbs/mobiles/jbgc28ww.exe

2. Go to Control Panel\Programs and UNinstall your current Synaptics/Alps drivers

4. Doubleclick the T450 driver you just downloaded, run it, but UNtick the option to install now.
--- It will unpack to C:\DRIVERS\Win\UNAV

7. Go to C:\DRIVERS\Win\UNAV and doubleclick on Setup.exe
--- when Windows complains about unsigned stuff, click on "install anyway".

9. ONLY if you run W10: go protect these W10 drivers against Micro$haft updates overwriting your hard work!

Thanks for the great guide!