I would like to report that after disabling the BIOS/UEFI whitelist using 1vyrain and equipping with a M.2 <-> mini-PCIe adapter (image on left) the Intel AX200 M.2 card works on X230. Both Wi-Fi and Bluetooth work. The only drawback is that the networking LED does not light up when the card is enabled.
On Debian 10 I use on daily basis I had to upgrade kernel to newer version 5.4 from default 4.19 in order to make Intel AX200's Wi-Fi to work.
As the length of the adapter with the WLAN card is slightly longer than the half size Intel 6205 card (which I had previously installed) in order to fit it along with the WWAN card I had to reverse the WWAN card holder and put a screw washer under the WWAN adapter as without it it skewed which might cause additional exert strength and harm to the WWAN mini-PCIe slot (whether you would also need it it depends on shape of the WWAN holder you have).

Image on right is the photo shows the card installed in the notebook (for transparency - before immobilizing the antenna cables).

In case of questions feel free to ask. 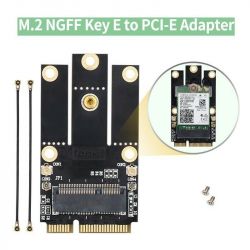 Thanks for the information. I'm planning to upgrade some of my Thinkpads to WiFi AC (upgraded the routers earlier this year), and this seems to be a viable option-- TBH I could get the older Intel 7265 but I wanted to test the router's MIMO capability.
Daily driver: X220 4291-C91 i7-2620M

Just avoid WLAN cards with CNVi interface only (for example Intel AC 9560) - X230 does not have necessary hardware on motherboard.

Beside that there are available "8260HMW" and "AX200HMW" WLAN cards with mini-PCIe slot but be aware that they are some non-Intel modifications with Intel's chip soldered on mini-PCIe format PCB. But opinions from buyers on Aliexpress vary, in particular there is one for "AX200HMW" I quote below:

It won't work with 160 MHz bandwidth because only one internal module antenna port (MHF4) is connected to the external connectors (U.FL) - look at the picture. The FCCID printed on the label is fake, it doesn't exist in FCC database and the internal module also doesn't have the CE mark. The Intel module is "engineering sample, not for sale or lease" type. The overall quality of adapter PCB is ultra low (just look at the RF traces, they are thick and very close to each other). Seller didn't accept my full refund proposal, I wasted a lot of time providing different pictures and proofs that this card is crap and finally I got only partial refund... So, you were warned - don't buy!
https://ae01.alicdn.com/kf/Ue466eef6ab8 ... 4a72bm.jpg
https://ae01.alicdn.com/kf/U2e28e2e3c49 ... 92b73q.jpg

For some time I have been considering buying one of them but finally decided to go the adapter way I mentioned in the opening post.

Thanks to user Wacholek from Polish forum PCLab I have also found out about Alfa Networks AWPCIE-AX200 WLAN card with mini-PCIe slot but I have no idea where could I buy them: https://www.alfa.com.tw/products_detail/326.htm
Top

My X230 works perfectly with Ivyprep/1vyrain and an AC-7260 wifi card.
Lovely day for a Guinness! (the Real Black Stuff). And pigs CAN fly!
Check out The Boardroom for Parts, Mods and Other Services.
Covid-19: Mask it or casket.
Top

mp107 wrote: ↑
Tue May 05, 2020 9:36 am
Thanks to user Wacholek from Polish forum PCLab I have also found out about Alfa Networks AWPCIE-AX200 WLAN card with mini-PCIe slot but I have no idea where could I buy them: https://www.alfa.com.tw/products_detail/326.htm

I've been thinking about getting that one. They are selling it on Alibaba, but as I just got notified will have at least 4 months delay because of the pandemic. It being from a reputable company, I doubt it will have the same issues as the AX200HMW you mentioned.
Top

Depending on which laptop you want it for, you can also get a (slightly slower) PCIe 7260-AC, which does not need an adapter.
See e.g. here: https://www.ebay.ie/itm/192536263524
Lovely day for a Guinness! (the Real Black Stuff). And pigs CAN fly!
Check out The Boardroom for Parts, Mods and Other Services.
Covid-19: Mask it or casket.
Top

I already know about that one and decided if I already invest in an upgrade it might as well be 802.11ax. If that means waiting a few more months… I'm not in a hurry.
Top
Post Reply
7 posts • Page 1 of 1