So one day I open up my laptop after around two nights of not using it I believe I left it in sleep mode because thats what I normally do. So i press the power button confused as to why it hasnt just went straight to the lock screen already. I press the power button and now i can't remember if it was plugged in or not but when i pressed power button, it would switch on and the lights would come on for about 4 or five seconds and then everything would switch off again only to power up again for about four or five seconds and then switch off again and it would continue this but I never tested for how long because I was in dismay as to why my laptop wasn't working and felt like the god of technolgy had cursed me.

The first thing i decided to do was to take apart the laptop and put it back together again frantically. I unplugged everything that could be unplugged and and even took the motherboard out to see what was underneath. So after I put it back together, something changed I'm not sure what, but instead of just turning off and on again over and over. The power light blinked three times when I plugged it in and when I pressed the power button the power button would stay on.

Im not sure what three blinks mean but I know that it is normally associated with the battery draining when left in sleep for too long. I have tried unplugging the cmos with and without the internal battery plugged in but it never made a difference.

So some things about my laptop, it is supervisor locked and I wish there was a way around that but thats just the way it is. And when I plug it in the power button blinks three times. I then press the power button and then sometimes the three lights around f1, f4 and fn light up for around .7 of a second and then switch off. but it only does this the first time i try after plugging it in and watched in despair the three blinks on the power button. Across all the times when I try to power it on the fan runs for about five seconds and then goes off, the power button stays on until i decide that enough is enough and switch it off. To switch it off just pressing it once like normal does nothing, i need to hold it down for exactly a second for the light to switch off. One thing peculiar that i noticed is that when I hold the power button for second at the same time the power light goes off, I can hear a faint tick coming from the speakers. I dont know if that tells you anything.
Another thing I notice is that when i switch it off the tone of the blank screen changes ever so slightly although i'm not sure wether or not my eyes are deceiving me, it happens again when I switch it off again though.

One thing I noticed about the laptop that is different or potentially broken although I am not sure whether it makes a difference and I have no clue as to how it happened is that there is an enclosure underneath some connection to the screen on the left to the right of the ethernet port where the cover is broken and the multiple little coils are sitting there exposed. When I pulled the tape off because it was peeling off the broken bit of enclosure came off as well , I will attach picture.

So yea here I am in depair over my precious laptop, I just hope that there is nothing serious , is there anyway of checking with the multimeter or whatever if the motherboard has fried itself but i doubt thats the case. 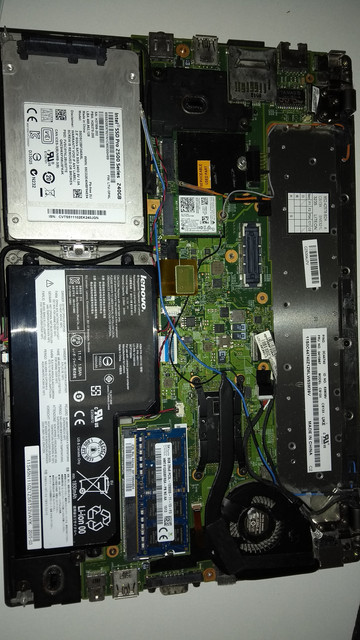 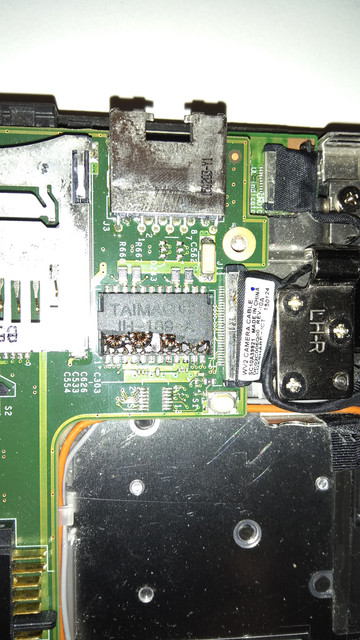 Welcome to the Forum.
Removing the password will cost about the same as replacing the motherboard, e.g. with https://www.ebay.ie/itm/264503171400
Also, let's hope you didn't disconnect the LCD-cable from the motherboard while the batteries were still in it!
If you did, you may well have blown the LCD backlight fuse.
Remove AC, the external battery and disconnect (or remove) the internal battery and the HDD/SSD.
Then press the reset button (tiny white button near the top of the external battery bay on your picture) for a few seconds.
Also press and hold down the power button for about 20 seconds.
Put in only AC and see if you can boot.
Let us know what (if anything) happens.
Lovely day for a Guinness! (the Real Black Stuff). And pigs CAN fly!
Check out The Boardroom for Parts, Mods and Other Services.
Covid-19: Mask it or Casket!
Top

hello brother, i followed your instructions and it seems like nothing has changed it still behaves in the same way when I try booting up. still triple blink.
When you mentioned the backlight fuse i thought hey that it probably the most likely thing that changed when i realised it was broken and decided to frantically take it apart and put it back together again and have probably made matters worse. Now I am no expert but when you mentioned that backlight fuse being blown that is repairable is it not?

But still does that explain the original behaviour of the laptop trying to boot up failing switching off and trying again over and over?
Top

To be honest, your motherboard seems to be in a desolate state.
Personally I would replace the motherboard.
Lovely day for a Guinness! (the Real Black Stuff). And pigs CAN fly!
Check out The Boardroom for Parts, Mods and Other Services.
Covid-19: Mask it or Casket!
Top

well yea i was thinking about doing that anyway. The cpu I have currently is the 5200u and plus the supervisor lock can be frustrating sometimes. I guess I will heed your advice on this one, and maybe have another look at this motherboard in my own time.
Top

hey man i've got a replacemeant motherboard and installed it, but i still have the same symptoms as before. Now my cmos battery has a good chance of being faulty but i just wanted to confirm with you that faulty cmos battery leads to triple blink and slight variance on lcd in terms of shade changing. And slight popping noise from the speakers as i power down again.
Top

Can you try the same with the old motherboard?

Does an external monitor show anything?
Lovely day for a Guinness! (the Real Black Stuff). And pigs CAN fly!
Check out The Boardroom for Parts, Mods and Other Services.
Covid-19: Mask it or Casket!
Top

no luck with holding for 20 seconds before.
it beeped at around only five seconds or so.

nothing comes from external monitor
Top

and it also beeps on the old motherboard as well when i remove ram.
Top

You can download X250 schematics for free here: https://www.alisaler.com/lenovo-thinkpa ... schematic/
Backlight has fuse F3 on page 25.
I suggest you try and check other fuses as well (for Continuity, with a multimeter that beeps if OK).

I'm afraid I'm out of other ideas.
Someone else wants to chime in?
Lovely day for a Guinness! (the Real Black Stuff). And pigs CAN fly!
Check out The Boardroom for Parts, Mods and Other Services.
Covid-19: Mask it or Casket!
Top

no problem man see if you can find someone else who might know as for me i will get to work trying to figure out it will be good learning experience. and this time i won't blow the backlight fuse when taking apart.
Top

hey man you'd never gues what happened. Today I put the laptop back together so I could take it to the repair shop tomorrow and get a free appraisal. And now my mother calls me downstairs asking me to look at something and hey it looks like my laptop just started working again when she decided to press the power button. It even booted into the OS and everything just like nothing ever happened it even opened up firefox with the same tabs that were open last time the thing was working.
Top

That machine somehow must have fallen asleep.
Lovely day for a Guinness! (the Real Black Stuff). And pigs CAN fly!
Check out The Boardroom for Parts, Mods and Other Services.
Covid-19: Mask it or Casket!
Top

Hi , Good that it's been sorted now.

I may look into the fast startup to disable , also take the power options for the selected plan to default settings. Can this be something related to hibernation file or VM ?

Eventhough we dont know the OS, i am seeing a lot of posts about Intel Management engine Interface 11.x in Win10 causing a lot of problems about sleep, not being able to recover from sleep (after a long time) . And rolling back to 10.x or 9.x seems to remedy some units. Under device manager, Power settings for keyboard and mouse also has "allow this device to wake the computer" i should check. And the power settings under regedit is reported to solve some probems.