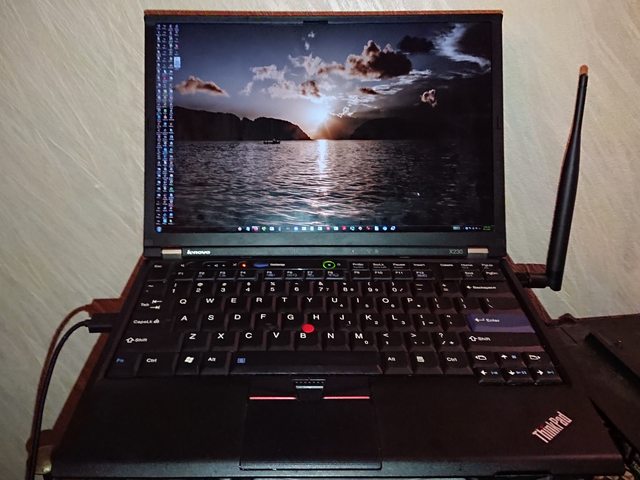 Greetings, I'll repurpose this thread on basically the same subject, my new X330 buyed secondhand on this forum, with my thoughts on it, a mini-review as such.

Pros:
Cons:
Other quirks:
Ultimately very pleased with this machine, by far the sexist ThinkPad in my possession. If poor wifi can be solved, I will retire my T420 favoring X330, and planning to acquire an Ultrabase. Bravo xytech. I will cherish this machine for the duration of our life together.

I have an X330 16:10 and the wifi indicator doesn't do anything. I don't know enough about the lid mods to want to open up the lid so was wondering if anyone knew why it is like this. I wonder if an x220 indicator board is behind an x230 nameplate so it's a simple mismatch of led-window location but I'd think I'd see some green coming through were that the case.

Behavior doesn't change with an Intel 6205 installed either.

Hope I'm not hijacking the thread.
I'm doing currently a similar comparison and considering pros and cons between a X330 and T420 with FHD mod.
I'm thinking if it is a good idea to change from T420 to X330.
I most probably would need to install WWAN antenna if possible or think of other way to use WWAN connetivity.

Pros X330:
- screen area is almost the same as the T420
- Its extremely portable which is useful as I use the T420 a lot when travelling
- it does have an additional mSata mod, which runs OS perfectly fine
- this allows me to use the SATA slot to move a second storage device with another machines.
- the keyboard is phenomenal
- more black

Cons X330:
- On some linux distros the laptop screen doesn't switch on after entering OS
- its more noisy than the T420
- A little bit hotter as well
- it doesn't have WWAN antennae, which I will need.
- speaker sound weak, which is not a big problem
- sometimes font can be a little hard to see if viewed from some distance.
- miniDP instead of full DP

Pros T420:
- extremely stable and durable, survived anything
- excellent WWAN reception and net speed, important when moving around. It has better reception than a smartphone.
- silent and cool
- free express card slot, which won't be used much

Cons T420:
- It is a lot bigger, but with a lot of bezzels meaning not much screen area.
- much heavier
- ultrabay drive tends to try to disconnect if laptop is not carried so that right side faces up in a backpack.
- lack of usb 3. Quality startech Usb 3 expresscard adapter for some reason makes cpu go crazy, while it works perfectly fine in any other Thinkpad


Can't comment on battery runtime, but since T420 doesn't have the garbage stock screen, it has lost ~30min runtime which is a fair tradeoff for the magnificent screen.
I have spare batteries for both.
I'm also quite pleased with the X330 for now.
Top

Thank you, TPFanatic and Bionicman, for the thoughtful reviews of the X330 and comparison to other modded systems.

What does this mean? Is the X330 an X230 planar with some of the components changed or a newly designed and manufactured planar sharing many components with the X230?
Top

@unixed yes the machine uses an X230 board, but modified with the eDP adapter borrowing a lane from the dock, BGA i7 3615QE, and Coreboot. Although I have replaced Coreboot with 1vyrain.

Okay, thank you. The screen resolution and aspect ratio are great and I don't see any reflections (do you know what the screen model is?) so that goes down as an unqualified success.
I see the keyboard has been swapped so that takes care of your interfaces.
For the CPU and battery performance it makes sense that you compare it to your T420 but comparison to the X230 options would put that mod into proper perspective.
Well done on acquiring it and thanks for the review.
Top

The LCD is a AUO B133QAN02.0 according to https://www.xyte.ch/mods/x230/ and confirmed by Monitor Asset Manager.

I owned only one X230 before, that I swapped X220 B, C, and D shells onto it, it was an i5 3320m XGA IPS model that I wound up giving away since I didn't like the low resolution. So sadly I didn't use it much to really get to know it. I had a failing 6 cell in it at the time so I never got a good sense of its runtime potential.

I generally preferred whatever machine has the highest resolution, so that was X200/X201 with the WXGA+, or X6* Tablet with SXGA+. Although I'd likely find myself unsatisfied with their dated I/O. Now none of those beat X330's WQXGA. So I'm fully team X330 now.

The claim that X330 could outperform T420 in battery life using quad core CPU raises quite interesting questions... if you could really test it.
Meanwhile I'm thinking - how impossible would it be to attach a WWAN antennae behind my X330 new screen ? Is it much bigger than the original ?
It probably could be done, even if it needs different model of antennae.
Top

The resolution is great but it's the increase in diagonal length and aspect ratio that makes the most of that resolution. For instance if you had 1600p and the screen was like a ruler it would count for nothing. As it is you've almost got the vertical height of a X61 which is no mean feat. That however may be the cause of your wifi woes since there can't be much room surrounding the screen.
You could try using a normal X230 lid with the screen connected but not in the lid and see if that makes a big difference to your wifi. Once you've identified the problem you can work on a solution. IBM/Lenovo used an "ear" for some T43, T60 and X61 for example.
Top

Took the X330 on some domestic flights today, although it spent most its time in carry-on, only coming out in the terminals for video games and the checkpoints of course. The smartphone actually came in handier for my commercial and communication purposes.
A wwan X330 otoh....
-posted from the smartphone.
lenovo T420 i5 2520m 16GB QHD, X330 i7 3615QE 16GB WQXGA, P71 i7 7700HQ 40GB 4K, and too many more...
Enable 2 finger scroll on old Synaptics touchpads.
Top
Post Reply
11 posts • Page 1 of 1

Return to “51nb and other modded Thinkpads”