I managed to find a non-working S30 Thinkpad in Japan and imported it to the UK to attempt a repair. The obvious issue was vinegar syndrome but when it arrived it would not even power up. If anyone doesn't know, the S30 and S31 appear to be quite rare subnotebooks from around 2001 (https://lighthouse-hero.livejournal.com/422447.html. I've never found one in the flesh before so I didn't really know what to make of it. It looks a bit like an X30 series machine but feels to me more like a Transnote variant. The screen, the body, the keyboard all feels very Transnote to me. It definitely feels very IBM Japan and doesn't feel at all like most of the iSeries machines, which are mostly cheaper machines not manufacturered by IBM.

This machine isn't branded S30 - it just says "i Series" on the LCD bezel, but I believe that's just marketing, although maybe there are two versions (I noticed in the HMM the 'i Series' LCD has a different part number to the S30).

Anyway, I opened this one up - it's really easy to work on - a few screws on the base and it completely opens up. I wasn't prepared for what I was going to find... 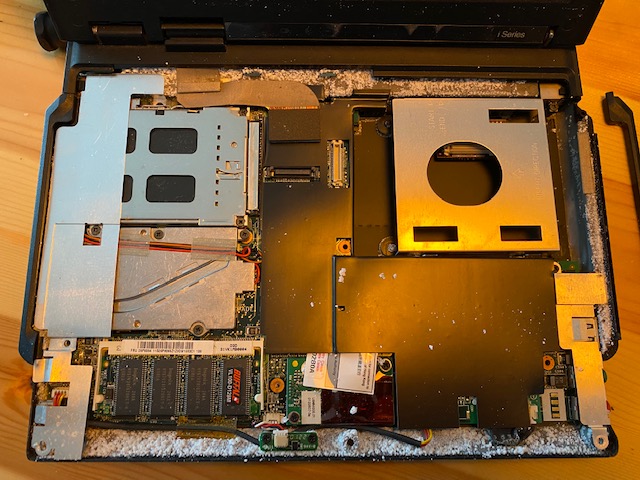 Yes, it's full of some kind of crystal silica stuff. Looks and feels like the kind of corrosion you get around a 30 year old Ni-Cad battery. The main battery is slightly opened at one end so maybe that gave off fumes.... I really don't know what it all is. So I stripped it all down, which was really quite simple - about 10 components to unscrew and as long as you kept them in order it was easy to reverse. The empty base looked like this: 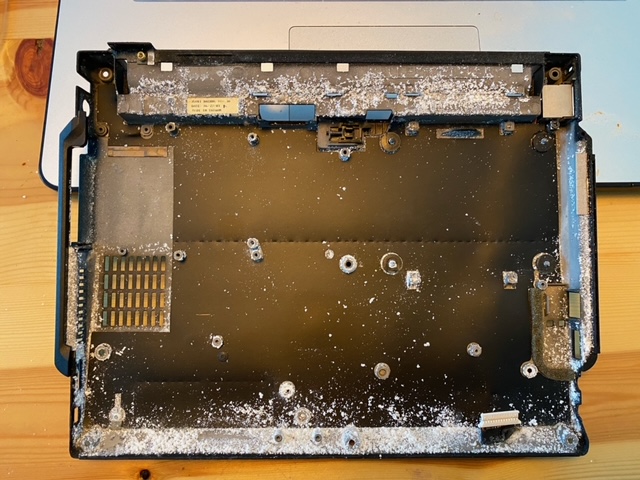 I warmed up the adhesive holding down that black plastic barrier and it lifted out. Washed it all out with warm soapy water and put it back together. Whilst the motherboard was out I checked all the fuses and everything checked out fine. 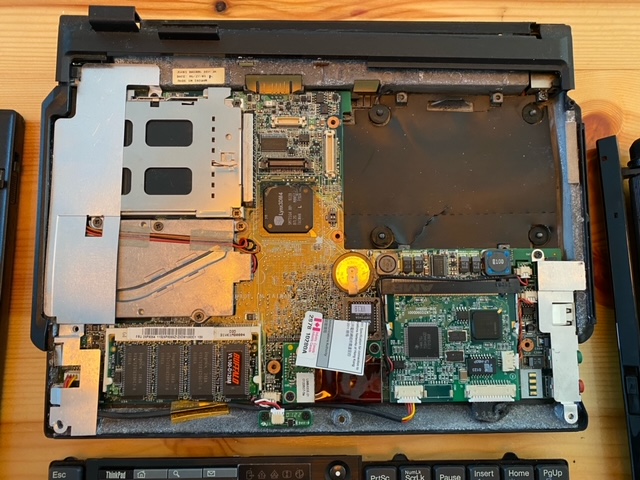 Incredibly it boots!! It didn't even blink before and now the status LEDs behave relatively normally. I'm not out of the woods yet though. I have reconnected the lid and whilst the backlight does appear to come on, nothing displays. My next step would have been to connect up to an external monitor but the video out looks like this: 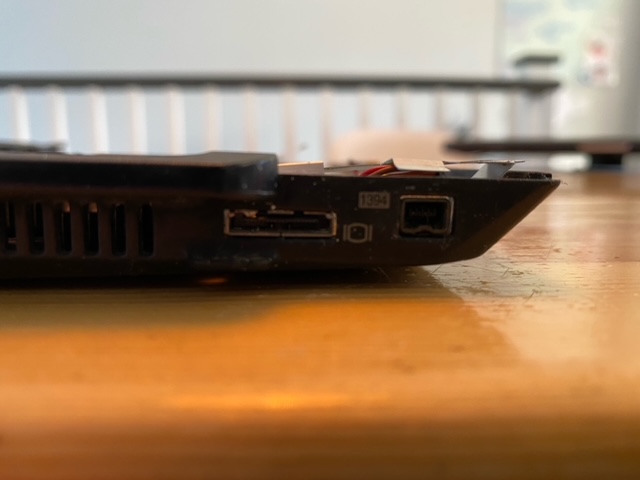 Does anyone know what that is or how to adapt it? I doubt a dock for one of these is going to be easy to find. I checked the HMM and google and all I can find is it referred to as a 'mini-jack'. It looks a bit like HDMI, a bit like display port but slightly smaller and definitely pre-dates either of those standards by many years.

I have managed to source a NOS replacement LCD, but it will take about 3 weeks to arrive, and it still might not work.

Any input from anyone would be much appreciated.... what was the white stuff and what's that video output port? 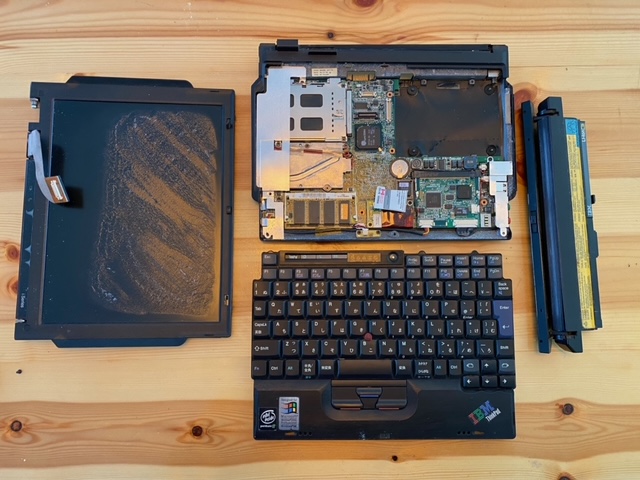 I opened up the main battery and it was a Lithium Ion battery. It didn't have any evidence of the white corrosion inside but the 6 x batteries - which looked about the size of the 1865 batteries used in Teslas and lots of other things - looked like they'd decayed in some way or another. The plastic coating on all of them was discoloured and wavy.

Well I'm not certain it's booting - but it is at least powering up. I don''t suppose you know what that weird external video output socket is on the side? I can't test it with an external LCD until I find a suitable adaptor, but I can't find what it's call. It's not even listed in the HMM....

Have you seen this: https://www.thinkwiki.org/wiki/Category:S30

https://page.auctions.yahoo.co.jp
https://aucview.aucfan.com
Both are connected to Yahoo Japan, but are no longer accessible in the EEA and the United Kingdom.