I was sorting through some stuff and couldn't help but take a couple of pics of these little stowaways whilst they were out. The 3 x 701c machines are full working and all are running a 486 @ 75Mhz with 16Mb RAM and boot from a CF card adaptor. One has all original rubber which hasn't yet degraded at all and the other two have been sympathetically polished back to the black plastic below... 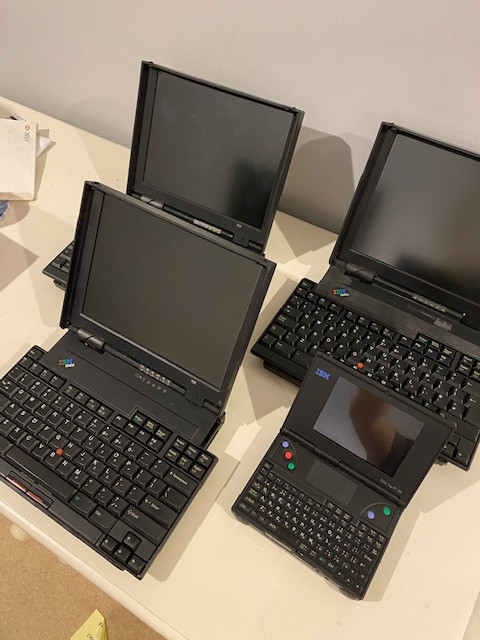 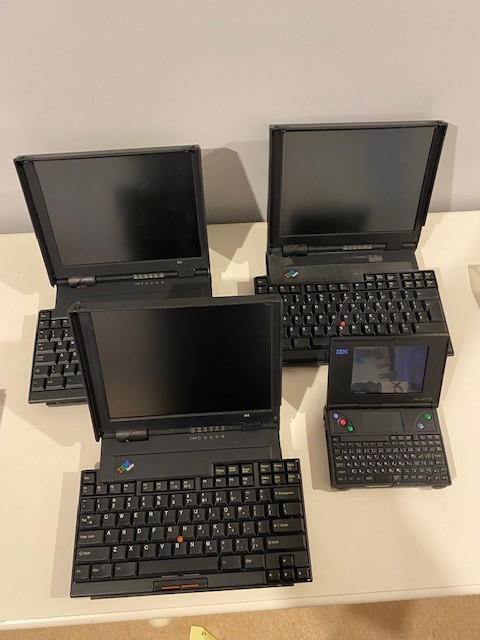 The PC110 is one of 4 and is actually in the worst condition. I have de-vinegared the screen and replaced the polarising film. It isn't perfect colour representation but it's pretty close. I think there is an issue with the keyboard ribbon cable though and I need to replace the keyboard at some point.

How was the de-vinigearing process?
I am afraid to try it out on old machines, but I couldn't really find a guide to do so.
Coffee, ThinkPads & Nikon Fan.

How was the de-vinigearing process?

Um, it's messy but straightforward. Some LCDs only have one film, usually on the top but a lot of the screens I've seen with the issue in IBMs have 2 layers - one on top and one sandwiched in the middle.

Most of them you can unpack and fold out the layers without having to desolder anything. I think with the PC110 I've done it by both simply unfolding and also desoldering one layer from another and then soldering it back in afterwards.

You can be really firm, I actually find the best tool to do the scraping is my own fingernail, though you can also get soft-ish plastic scrapers on amazon. My fingernail is tough enough to scratch off but not so as to scratch the glass. The glass is strong but you should use a thin cloth to do it on so that the other side doesn't scratch against the workspace you're leaning on.

I've tried lots of chemicals including 100% IPA but I've found that warm water is as good as anything.

ah! It was you who posted that photo on r/thinkpad. Nice machines, I’m pretty jealous. Nice systems.
Top

Good info. I hope some of these folk just let us know where to source the materials...
Unless they want to DIY it themselves for a heavy profit.

I wonder if we would be able to use the film from newer TFT screens and just have to cut precisely to fit them in.
Quite a bit of these HD screens are a cheap $25 sometimes.
Coffee, ThinkPads & Nikon Fan.