Recently I posted a topic about my T60p 2007WUK working hotter with a Sandisk SSD than a Samsung SSD and I eventually went for the Samsung.

As of today I realized the mobo is toast as its not booting past POST with a single beep and then a blank screen. Added to that it works sometimes and sometimes dosent. Very unpredictable.

Now the overall laptop being in excellent shape, Im wondering if it has any value left and therefore sell it as a whole or break it up into parts for a better overall yield or buy a a replacement motherboard and where to buy with the right specs.

Specs:
Purchased in the US in 2010 from IBM certified used store.
US QWERTY layout
US power adapater
OEM battery

Hey, sorry for your loss but you can have a very nice frankenpad with that mint chassis T60p with 15 uxga display. It is not the end but the beginning of your real thinkpad modding journey.

Ditto, you can get the 14.1" 4:3 T61 non-widescreen motherboards here: https://www.theboardroom.info/t61mobo.html
Top

Thanks for the inputs.

I'm not that tech smart to get into the modding business plus Im busy with work. The best I could do is simply put in a used T60p working mobo.

Any recommendations about a better CPU than the one that currently exists.

I'm ok with the unreliable heatsink and fan overheating. I really dont have time to do a full makeover although I understand that would be the better way forward. Thanks.
T400
T60p 2007-WUK
Top

Other than that you can use any 14.1" T60 planar together with your current interposer card or 15.0" T60 planar (the planars themselves are identical), these satisfy your straight swap requirements. It is only the 15.4" widescreen T60 you have to avoid.

You'd probably have to refer to the Hardware Maintenance Manual (HMM) linked to at the top of the page either way.
Top

Best you can do is to make a Frankenpad out of it.
I'll be doing it with my T60, waiting for parts I ordered and spare time (exams mid June).
Watch these videos:

If you will not decide going the Frankenpad way, I'll have spare working motherboard from my T60 4:3 15" which as far as I know is a drop in replacement to your T60p (guys please correct me if I'm wrong), but you can't enjoy better CPUs that came with T61 motherboard and most of all Middleton BIOS that unlocks SATA 2 speed for the SSD drive and up to 8GB RAM in crazy expensive DDR2 sticks

There is something really weird going on and I'm at my wits end. This well taken care of T60p has some sort of a love/hate relation with Samsung SSDs. This damm thing has started working again. How and why I'm still trying to figure out.

Here's the story so far:

Till Feb of this year, I was using this T60p with a Samsung 850 EVO 250Gb and sometime back this very symptom started showing up(single beep past POST and nothing more) and at that time I thought the 850 was dead, so I ended up buying a Sandisk Plus 250GB which ran ok but hotter than the 850, so I ended up buying a 860 EVO 250gb and used it for about a month till a few days back the same symptom showed up again and so I thought this is now toast.

Today, just as a random action and before I could decide what to do with this burnt out T60p or so I thought it was, I decided to put back the Sandisk and voila --> she was up and running. I restarted 3-4 times and each time was ok so I went and put back the 860 and bingo --> here I am typing this message on what I thought was a dead T60p.

While I'm definitely happy that she ain't dead yet, any any idea what the heck is going on? Is it the heat cause it runs warm-hot with the fan on all the time. Thanks for any input to this odd weird problem.

PS: At this point Im really thinking I could put in a new T7600 processor and a heatsink hoping its just a straight off swap. Any recommendations on the right heatsink/fan?
T400
T60p 2007-WUK
Top

When was the last time you refreshed the thermal paste between CPU and cooler?
Lovely day for a Guinness! (The Real Black Stuff)
Covid-19: Stay safe, so still Mask it or Casket!
Top

That explains your toaster.
Lovely day for a Guinness! (The Real Black Stuff)
Covid-19: Stay safe, so still Mask it or Casket!
Top

I have no idea what the problem is?
C'mon, heat has been his problem all along!
Top

Thanks to all for the valuable inputs.

After these past few days and doing CPR on the laptop, I think I'll spend some time to replace the heatsink/fan and the processor.

From what I read online, the T60p HS/Fan were sub par and the W500 or T61/T61p were better replacements. In any case I was thinking of putting in some new thermal paste AS5 anyway.

If you are already removing the fan, and you have that CPU handy, might as well replace it. A T2600 is rather high-end, so don't expect any noticeable performance benefits.

I decided to go it step by step and thought it was would be best to start off with whatever I have and go from there. So as I had some Titan thermal paste lying around, I went ahead and applied a new layer of the thermal compound to the CPU and the laptop's now running a lot cooler than before --> almost 15 deg C cooler on each core. The heatsink and fan had almost no dust so no blockages there, so I guess the only issue was improper heat transfer.

Here are the before and after values and couple of pics from the HSF right after I pulled it out and before cleaning. 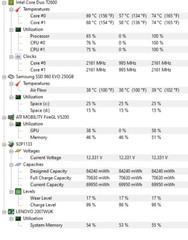 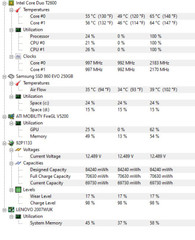 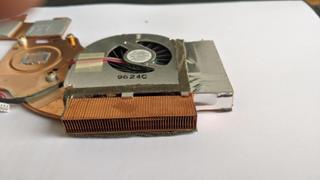 Hope this solves the problem permanently. Thanks to all for your valuable inputs.
T400
T60p 2007-WUK
Top

Please remind me again, if I have a T60 shell and the T61 planar, what other parts do I need?
Top

TPFanatic wrote: ↑
Sun Jul 19, 2020 8:40 pm
If it's a 15" T60 you need the interposer board from the 15" T60 motherboard. No other parts are needed. You do need to remove or file down some magnesium frame as the Modem card placement changed between the two series, and I believe Modem functionality is eliminated.

Thanks for the information on the interposer. The time for dial-up modems is gone, anyway.

Duly noted. Now it's time to grab the parts. My old T60 was stolen, and I'm searching the local Brazilian market for a new palm rest and a keyboard bezel.
I will use the T60p base ajkula66 sold to me.
Top
Post Reply
21 posts • Page 1 of 1

Users browsing this forum: No registered users and 26 guests