R, A, G and Z series specific matters only. NOT for AMD-Ryzen.
Post Reply
2 posts • Page 1 of 1
Message
Author

I downloaded the modified BIOS from endeer.cz, even wrote to the developer, but he could not help ...

The problem is that the r32bios.iso file, from which I make a boot disk via ImgBurn (and before that I did a boot flash drive through UltraISO, but in this case the download does not happen - see screenshot), 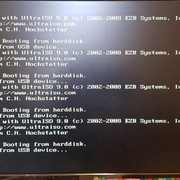 is somehow strange ... Or am I doing something wrong.
The boot disk or flash drive does not work! The system just boots into Windows and that's it!

At the same time, another boot disk to solve the "error 1802" problem found on the Internet works! That is, loading from it occurs, but that's all, it does not solve the problem unfortunately.
And for this model of laptop there is only one option - a modified BIOS.

Further, there, on the site endeer.cz, it was possible to download the file $008A000.FL1 - probably this is the BIOS? But how to flash it now, how to make a boot disk?
Top

Users browsing this forum: No registered users and 33 guests